In August of 2016, the biggest flood to hit Louisiana in 500 years happened. More than 30,000 people were evacuated and over 146,000 homes damaged. Unlike well-known Hurricane Katrina in 2005, it didn’t have a name, and the rescue and recovery efforts were better orchestrated.

Little was publicized about the rescue efforts of a small ragtag band of boaters known as the “Cajun Navy.” But their story deserves to be told. It’s a story about regular folks doing extraordinary things, using a little tech and a lot of determination.

Who is the Cajun Navy?

The original Cajun Navy was born out of necessity during Hurricane Katrina in 2005. Plagued by government red tape and delayed rescue efforts during Katrina, a small group of locals with boats got together and pitched in to do whatever they could. They became local heroes known as The Cajun Navy, as they picked up residents trapped by flood waters, put them on their boats, and transported them to safety. 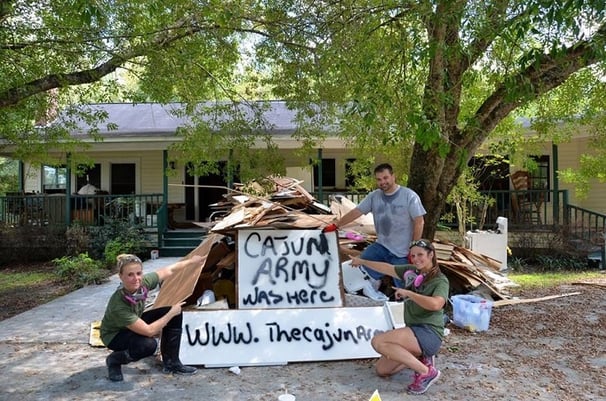 The namesake group was called into action again this past August 12th, when flooding began in Livingston Parish – the hardest hit area. The amount of water rose so quickly, that it caught many residents off guard. Unable to prepare and evacuate in time, many found themselves stranded in their homes or on their rooftops.

Initial frantic calls for help came across on Facebook posts. AT&T cell towers were knocked out, making phone calls impossible. Many people in neighboring unaffected parishes saw these pleas and wanted to do something to help. They didn’t want to sit idle or wait for the government to come and rescue these people. It was at this point that a new, stronger, and more organized Cajun Navy really sprang into action.

Realizing there needed to be a central point of command to coordinate rescue efforts, stay-at-home mom and local Good Samaritan, Alaina Hebert, took it upon herself to head rescue efforts. A brand-new Facebook group for rescue efforts was created, asking for volunteers to join, especially those with boats and other equipment. The group eventually grew to over 23,000 members from all parts of the U.S. With a huge base of volunteers ready and able to help out, the Cajun Navy was now ready to take on the daunting task of coordinating water rescues.

How the Cajun Navy Used Zello to Save Lives

As the flooding progressed, Parish Sheriff offices quickly became inundated with calls for help. With a backlog of over over 150 unanswered calls, Parish officials welcomed the offer of help from the Cajun Navy to handle some of the overflow. Cajun Navy volunteers immediately stepped in to help, going where needed with Sheriff Deputies onboard using their flotilla of fishing boats, canoes, and kayaks.

In the end, the Cajun Navy, with their band of 100-200 amateur and professional boaters, managed to save thousands of stranded residents and pets. The entire rescue effort was coordinated using two free apps: Zello as a live walkie-talkie dispatch and Glympse as a GPS locator. It was the first time apps had been used in this way - the technology did not exist during Hurricane Katrina.

Shawn Boudreaux, VP of the Cajun Navy and self-described “closet nerd” introduced the technology to the group. An avid player of Ingress (a location-based mobile app game), he used Zello to communicate with fellow team members during Ingress events. Shawn knew Zello could be a great tool for dispatchers to coordinate the hundreds of boats scattered throughout flooded areas. With the support of now Cajun Navy President, Alaina Hebert, he put the apps in motion by asking for volunteers on Facebook to come and install Zello and Glympse on their devices before going out on water rescues.

Shawn created a private Zello channel called “CajunNavy” for the volunteer dispatchers and boaters to communicate with each other. At the peak of the crisis, the channel had over 800 members or subscribers. All 800 could be online and active at the same time (the limit is 2000). As calls for help came in, they were transmitted live on the channel. By using Glympse and Google Maps for GPS coordinates, the closest boats could then be dispatched to help. The process resulted in more efficient and timely rescues.

Though flood waters have since receded, the Cajun Navy and Cajun Army continues to help their neighbors rebuild their homes and lives. This is all done without monetary donations or government aid. If you would like to help out or just thank them, please join their Facebook groups and Zello channel by using the links below.