We've been honored to work with Advanced Ground Information Systems on one of the most classic uses for push-to-talk: a first responder/military application called "LifeRing." Using Zello's stellar SDK/API, LifeRing combines PTT, GPS and an impenetrable data bubble to make an a life-saving walkie talkie app. 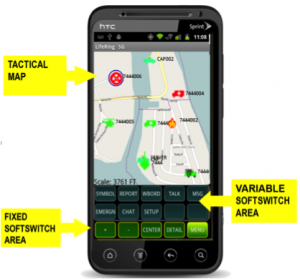 How does a military walkie talkie app work?

Much information is classified. However, we can reveal that AGIS' CEO Cap Beyer describes the LifeRing system as, “a map-­‐based world,” in which each of AGIS’ key features is tied to its GPS function. For instance, a military officer has the ability to silently direct his troops by drawing an arrow on his own LifeRing map.

Beyer explains, “What he draws on his map they, his troops, see on theirs.” Officers can take advantage of all LifeRing’s features this way – without ever needing to navigate away from their maps.

Where does push-to-talk fit in?

Zello works the same way. Rather than navigating to a contacts list, soldiers use symbols spread across their map that represent their contacts’ present location. The moment they select a symbol, Zello begins transmitting clear, real-­‐time audio to the contact chosen.

Before they had Zello, Beyer explains, “We were using our own conference call software, but the disadvantage with large groups outdoors is that you hear an extensive amount of background noise.” Under the old system, officers often had to fight background noises such as wind, rain or even gunfire when trying to communicate with their troops. With Zello, officers now use Push-to-Talk that provides the clarity that is crucial in a combat situation.

Why does LifeRing matter?

LifeRing has played a significant role in protecting U.S. naval and military operations. The system has been used at President Obama’s inauguration in 2008 and at the Asian-Pacific Economic Council in 2011. It is currently used by the U.S. Military.

As we wrapped up our interview with AGIS, Beyer commended above all Zello’s flexibility; our SDK and API helped make Beyer’s “map‐based world” possible. He concluded, “You’ve been easy to work with. The whole experience has been very rewarding.”