There is an old saying: “Necessity is the mother of invention”. This adage has proven to be true for many inventions which have since become household staples - telephones and lightbulbs to name a couple.

The idea of crowdsourcing rescues during natural disasters also grew out of necessity - how to rescue people who couldn’t reach 911, for whatever reason. For example, if phone lines and dispatch centers were jammed or not enough first responders were available to conduct rescues.

Through crowdsourcing, anyone with Internet could relay requests for help to available rescue groups on the ground, using social media and technology platforms to quickly spread the word. People could be located across the country or on the other side of the world and still help by dispatching or lending expertise and resources. Information could be easily and quickly disseminated to thousands through a single platform.

That was the impetus behind the volunteer group now known as CrowdSource Rescue (CSR). This group was instrumental in saving thousands of people during one of the worst floods in Houston’s history. It was never planned...it just grew out of necessity.

It All Began with Hurricane Harvey

Hurricane Harvey made landfall on August 25, 2017. Rain from the storm system lasted 4-5 days and flooding began to inundate Houston and surrounding areas. Many people were not prepared to handle the deluge of water or did not expect their area to flood, leaving them stranded in their homes and on rooftops. 911 was overwhelmed with requests for help and could not handle the volume of calls. Consequently, many people sought help by posting on Facebook and Twitter instead.

One of the many volunteers who tried to help rescue neighbors in need was Matthew Marchetti. He noticed fellow members at Chapelwood United Methodist Church and people throughout the neighborhood needing help getting to safe ground. That’s where CSR started. Matt and CSR Co-Founder, Nate Larson, quickly spun up a solution: a simple website with a form to share the details of the situation and location. By morning, rescue requests had flooded in and spontaneous volunteers hopped in their boats.

During the boat rescues, Matt decided to download Zello to help with communications. He heard about Zello during the West Texas explosion and wondered if it would be useful in this case. Once on Zello, he found one of the civilian volunteer Harvey rescue channels and realized they were using CSR after listening in. He was intrigued by all the information being exchanged on the channels. Dispatchers were matching people in need with nearby rescuers with boats. It was pretty impressive to see all of the people jumping in to help, but there was also a deluge of information and lack of coordination. It was hard to sort out which rescuer was closest to the requester, and duplicate rescue efforts often resulted in misspent resources. 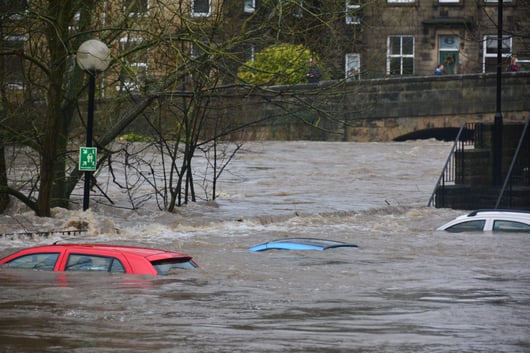 He wanted to develop a better way to identify where people needed help, how to match rescuers to those requests, and close out requests once rescues were completed. Being a data engineer and developer focused on finding solutions to big-data issues, Matt has a vast knowledge of GPS mapping tools. He used his skills to update the solution into a mapping app to help coordinate rescues. Spending a long night in his leaky damp office, Matt and Nate created a little web-based app that became known as "houstonharveyrescue.com"

Rescue requests showed as pins on a map that volunteer rescuers were able to view and respond to. Each request has an ID assigned, so progress can be tracked. The first day, he logged the 5 or 6 requests received and called it a night, hoping they could do more the next day.

By the next day, Matt awoke to see that his small list of rescue requests from the night before had grown to about 1,000! It was quite a shock to realize what Matt and Nate created was now a major tool being used to rescue people from flood waters. From that day forward, the platform grew exponentially. By the end, over 60,000 people registered to volunteer, expanding to neighborhoods well beyond Matt’s own. Over 30,000 rescue missions were completed during Harvey... and CrowdSource Rescue was (officially) born.

During Harvey, use of the platform grew primarily through word-of-mouth on Zello channels, the various Cajun Navy groups, and CSR’s own social media presence. It was clear there were 3 symbiotic parts to the crowdsourced rescue efforts. By combining forces, CSR, Zello, and the various rescue groups become even more powerful and effective. CSR provided the mapping solution and a platform to connect rescuers with those who needed help. Zello provided communications, and spontaneous volunteer groups like the Cajun Navy groups, Geaux Rescue, Salty Water Rescue, and 50 Star SAR provided manpower, equipment and, ultimately, a refuge from the effects of a disaster.

CrowdSource Rescue’s Zello channel is located at https://zello.com/crowdsourcerescue. You can add the channel to your Channels list by scanning its QR code or searching by its name. The channel is activated during major disaster events, and you can listen in to current rescue efforts. There are tentative plans to integrate Zello into the CSR  platform in 2019, so CSR users can quickly access Zello channels during rescue events.

With new-found notoriety initially resulting from Hurricane Harvey - then Hurricanes Irma and Maria, an earthquake in Mexico City, wildfires in California and the Kerala floods, CSR become somewhat of a phenom in 2017 throughout the emergency management space. Mainstream media contacted them for interviews. Major universities, including Rice University’s Kinder Institute for Urban Research, Texas A&M’s Hazard Reduction & Recovery Center, and Harvard wanted to study them, to decipher how it grew organically and identify the benefits of crowdsourcing for disaster rescue and recovery.

With each new disaster, Matt and a core group of 5 volunteers have continued to enhance features and improve usability of the app, making it the “go-to” platform for crowdsourced rescue efforts. During any given disaster event, hundreds of additional volunteers sign up to help out. Each event triggers a new map and listings for volunteers. After creating a verified account, people can sign up to become a rescuer or volunteer in other capacities. Creating an account isn’t necessary to submit rescue requests.

Many of the rescue volunteers using CSR’s platform are retired veterans, have first responder experience, or volunteered during previous disasters. Some even have rescue experience dating back to Hurricane Katrina. But many people, located throughout the world, have no direct rescue experience and just want to help in any way they can. In addition, many federal, state and local agencies have started to partner with CSR to prepare for emergency disaster events, helping to reduce duplication of efforts and better utilize 911 and government resources.

CSR is a 100% volunteer organization and currently operates with the help of supporters who donate through the website. Now officially trademarked as CrowdSource Rescue, the organization obtained fiscal sponsorship for 501(c)(3) nonprofit status by Outdoorsmen In Action in September 2018.

CSR has continued to assist in rescue efforts - most recently during Hurricane Florence and Hurricane Michael of this year. Since its inception, more than 43,000 rescues have been completed by CSR. This includes rescues of humans as well as animals.

As natural disasters will always be inevitable, it’s reassuring to know there are people who are willing and eager to volunteer on sites like CSR. We are honored to be a part of these efforts and thank the many tireless volunteers who spend their time and money to help others in need.