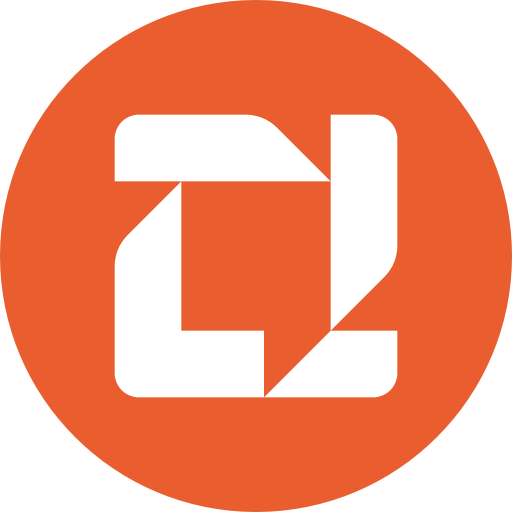 Zello reached a big milestone recently: our community is now 150 million users strong! Since we started the company, Zello has powered communication and coordination across the globe between family, friends, colleagues, and strangers alike. As you can see in the chart below, it’s a place to forge friendships, connect over common interests, stage rescues, get work done, and, as we’ll see later, even resist oppressive government regimes. 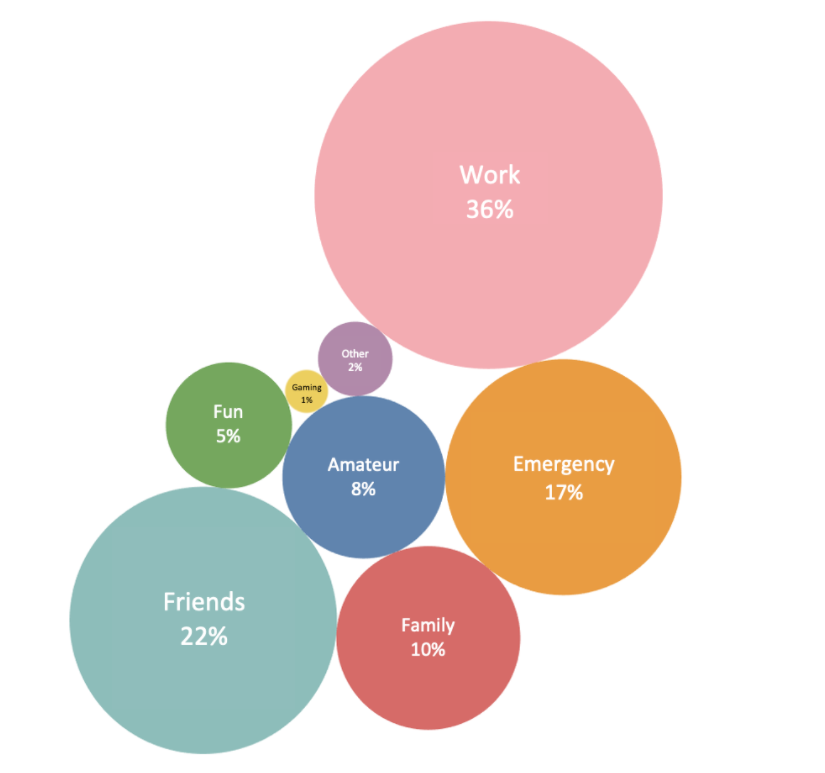 While Zello was launched in 2007, our first major growth spurt began with the release of a Zello Blackberry application in 2011. In a matter of weeks, the number of users on the platform skyrocketed from in the hundreds of users to several million.

Since then, Zello’s growth has accelerated. Just take a look at where it started and where it’s gone.

As you can see, along the way to 150 million users, there are lots of spikes — and some of those more jagged peaks have interesting stories to tell about world events.

In February of 2014, protestors in the Ukraine attempted to oust president Viktor Yanukovych  during what is called the Revolution of Dignity or the Euromaidan Revolution. Clashes and crackdowns were violent, leading to the deaths of nearly 130 people. The revolution culminated in Yanukovych fleeing the country, and the election of Petro Poroshenko in his place.

On Zello, coordination around the revolution was evident.

Daily Downloads Before, During, and After
the Ukrainian Revolution of Dignity

In November of 2013, there was only a very low Zello presence in the Ukraine. A slight rise in early February paved the way for a jagged peak on February 21st, 2014 at 24,587 new downloads on that day alone. This syncs with the timeline when the protests were most heated: between February 18th and February 23rd, 2014, during which time protestors sustained the greatest number of casualties at the hands of the riot police. Yanukovych fled from Kyiv to Russia on the 22nd.

Summer and early fall of 2017 was a busy hurricane season — a fact we could see clearly on Zello without ever turning on the Weather Channel. According to our data, nearly 10 million people downloaded Zello during Hurricanes Harvey, Irma, and Maria combined. At one point, Zello was being downloaded at a rate of 7,000 downloads per minute.

Zooming down into a slice of that time period, we can see that in late August and early September of 2017, monthly downloads of Zello skyrocketed from 2.5 million to roughly 8.45 million in early September. This roughly parallels the timeline of both Hurricane Harvey and a major earthquake in Mexico — both critical times for coordinating search and rescue efforts and locating family members who were no longer reachable by traditional means. 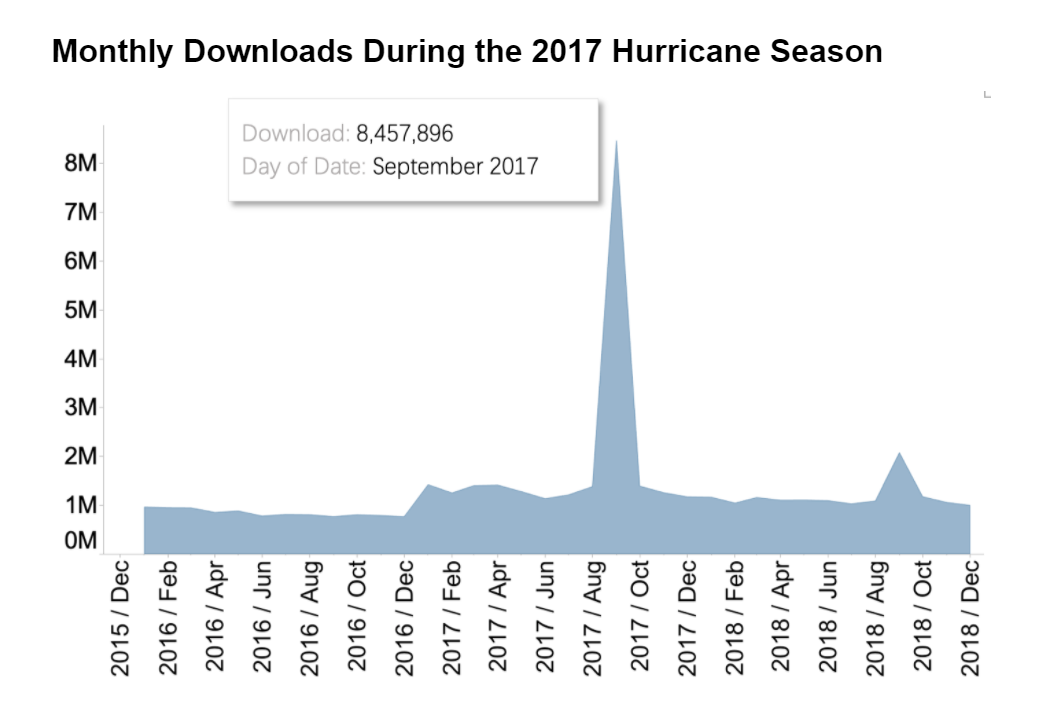 Peel back that data and you’ll find within it a number of other interesting stories, such as that of the Cajun Navy, an impressive volunteer group of everyday boaters who have assisted in rescues during both hurricane and flooding events in Louisiana. The Cajun Navy was originally formed to help perform rescues in the wake of Hurricane Katrina in 2005. During Hurricane Harvey in 2017, the Cajun Navy’s newly launched Zello channel grew to over 40,000 strong, with numerous supporting specialty channels springing up to solve specific issues, such as animal rescue.

Hurricane Harvey also sparked the genesis of Crowdsource Rescue. In the Houston area, rain continued for 5 days after Harvey made landfall. The flooding got so high, many residents fled to their rooftops, where they had to wait for rescue. Matthew Marchetti, a data-engineer and developer, and Nate Larson quickly put together a website, now called https://crowdsourcerescue.com/, to coordinate rescues, providing mapping tools and a platform for rescuers to connect. Crowdsource Rescue grew in popularity on the Zello channels that already existed among volunteer groups like the Cajun Navy, Salty Water Rescue, Geaux Rescue, and 50 Star SAR, which use Zello to locate victims and coordinate rescues. Crowdsource Rescue launched a channel of its own, which now has more than 25 thousand users.

Just a few weeks following Hurricane Harvey, Hurricane Maria, a category 5 storm, slammed into Puerto Rico on September 16th of 2017. The death toll and damage was massive and aid was slow to come, cutting off many Puerto Ricans from each other and from their families in other parts of the world. We heard many stories of Puerto Ricans living outside of Puerto Rico using Zello to check in on family members and property, and to send aid.

Listening in on the rescues that happened during the 2017 season and beyond has been one of the most exciting and rewarding experiences we’ve had in our history so far.

Zello has long had a global user base, with users in 218 countries around the world — and more every day. Recently, we experienced explosive growth in Latin America.

This map shows the number of user signups for July 2020. As you can see, the top 4 countries in this list are in Latin America, counting collectively for 71.4% of total sign-ups for the month.

Zello has previously seen spikes in Latin American usage with events such as the 2017 Puebla earthquake in Mexico, where Zello was used to coordinate rescue efforts and deliver much needed supplies.

Since 2014, Zello has also been used extensively in continued efforts to resist the Maduro regime in Venezuela. One channel, Venezuela Hasta Los Tuétanos, has more than 75 thousand subscribers. In an interview with Zello, the channel owner described their Zello channel as a lifeline, one subscribers use to warn each of the movements of armed forces at protests. In other cases, the channel has helped to coordinate the delivery of crucial medications from outside non-governmental organizations to critical patients when they’ve otherwise been blocked by the regime.

But just as important, the Venezuela Hasta Los Tuétanos channel keeps citizens aware of what’s really happening within Venezuela, something the local news, which is controlled by the government, does not do. Many also come just to listen, connect, and sometimes, laugh. The anonymity of the platform is key to ensuring all of these efforts are kept feasible and safe.

While we first noted increased activity in Venezuela in 2014, these efforts were again apparent in January of 2019, around the time of Maduro’s second inauguration. Downloads of Zello in the country increased by 135%. Total active devices also increased in the month by almost 40%.

Over the years we have found ourselves continually astounded by the many creative and innovative ways our users use Zello to change the world. We look forward to seeing what the next 150 million can do!