The Northwest Florida School of Biblical Studies (NFSBS) MIT Podcast discusses topics related to technology in church operations. MIT stands for “Ministry Involving Technology.” MIT podcasts are hosted by Guyton Montgomery and Bryan Cook, from the NFSBS. We were fascinated by Guyton’s notion that Zello was a better option than guns for securing a church and had a chat with him to find out more.

Guyton is a preacher for the Church of Christ ministry. His church is located in the Florida panhandle. With the recent mass shootings at a school in Florida and a church in Texas, improving security for his 120-member church is a priority for Guyton. Before manning the pulpit, Guyton was in Mississippi law enforcement for over a decade, holding various positions including sheriff, school resource officer, SWAT team, and DUI inspector. So, he understood the importance of instant, clear, and accurate communications during crisis events, like shootings. 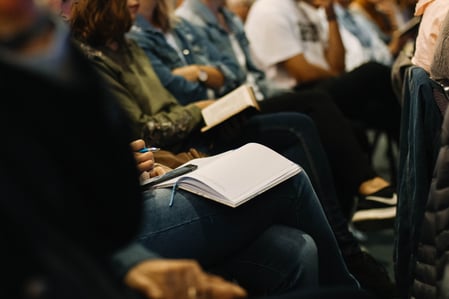 Guyton often used analog two-way radios during his time in law enforcement. They were effective for instant communications, but they had limitations. Two-way radio frequencies could be intercepted by anyone who had the right equipment (scanners), and there was a finite range for transmissions. In addition, radios could not record conversations which, for litigation and investigative purposes, would be critical to have.

A few weeks ago, while in Mississippi for court duty, Guyton was chatting with some old buddies from his law enforcement days and found out about Zello push-to-talk (PTT). It sounded like a high-tech version of two-way radios.Turned out his buddies were already using Zello for their church security team, and they found it invaluable. They insisted that the Zello push-to-talk app had the best radios for church security.

Intrigued, Guyton immediately downloaded it and had his family download it as well. After one week, he was sold on its capabilities and plans to implement Zello for his church security team soon. In addition to a channel for the security team, he plans to create a “listen only” or broadcast channel for church members to receive announcements and chaperone instructions during outings.

The fact that Zello was free, sounded great, had no distance limitations, and could record all conversations in History made it the perfect communications tool for his security team. Rather than use expensive and bulky walkie-talkies, church security team members could use their own smartphones and a small earpiece to quietly talk amongst themselves.

How the Church Used Zello

As Guyton described how the security team currently worked, it was obvious there was a serious gap in the communications system. Though the exterior doors are locked during sermons, anyone could force their way through the front lobby door by overtaking the greeter on duty. The church greeter, who is also on the security team, has no way to inform people in the auditorium (where the sermon is held) that an armed intruder has broken in.

With a Zello Security channel on his smartphone and an earpiece, the greeter could quickly and discreetly request backup if he felt uneasy about someone approaching the front door. The channel would also inform Guyton and the sound booth person in the auditorium that something unexpected was happening in the lobby and to prepare the congregation.

In addition to church security and chaperoning events, Guyton finds Zello useful for everyday activities with his family, such as keeping in touch while at the store and using it as an intercom at home. Given that it’s only been a few weeks since he discovered Zello, we’re delighted to hear about Guyton’s plan to use Zello for his security team and want to thank him and co-host Bryan Cook for doing this informative podcast.

You can hear the full 18-minute podcast entitled “Zello app for church security” at https://player.fm/series/mit-ministry-involving-technology/episode-10-zello-app-for-church-security.

How to Measure the Speed of Push to Talk Apps