When Ken Kelley was a kid, he loved the TV show “Emergency.” It starred two paramedic-firefighters named Johnny Gage and Roy Desoto, who quickly became Ken’s heroes. In fact, Johnny and Roy inspired Ken so much that at age 15, he volunteered with the local volunteer fire department.

“I was living the dream as a volunteer firefighter,” Ken explains now, 36 years later. “The same thing Johnny and Roy were doing in Los Angeles, I was doing it right there in rural Arkansas.”

Ken would go out on the fire truck and work the valves and gages and fight fires. “Everyone thinks fighting fires is just spraying water but it’s so much more complicated than that. Firefighting is a science and an art,” he says.

Although Ken went through full EMT training at age 15, he was too young to get licensed. 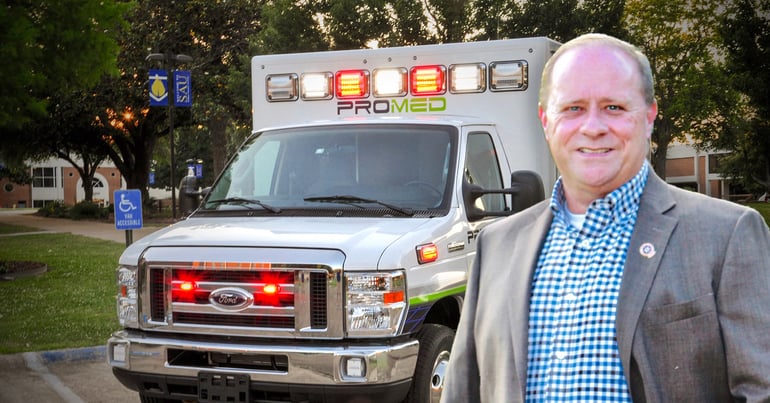 Fast forward three years to Ken’s first day at college at Southern Arkansas University. As he took a seat in one of the university classrooms, another student spotted his jacket. It had the volunteer fire department patch on it.

The student said, “Hey! Are you an EMT?”

“Well, there’s going to be an EMT training course here on campus. It starts tomorrow and you should come,” the guy said.

Some say luck is when preparation meets opportunity.  If so, Ken certainly got lucky. He not only went to the training class, but he soon passed the exam and became a licensed EMT.

The very next day after getting his license, Ken went to work for the small ambulance company that operated in the town of Magnolia, Arkansas where the university is. Ken not only paid his way through college by working there, but in a few years, he’d also helped grow the company large enough that it had attracted national attention. Shortly after Ken graduated college with a degree in business administration, the Rural/Metro Corporation acquired the company.

For four years, Ken managed the Arkansas operations of the Rural/Metro Corporation, which responded to emergencies in three counties. But when Rural/Metro decided to stop working in the state, Ken bought the Arkansas part of the business.

Today, Ken’s company is called ProMed Ambulance. It has expanded operations to seven Arkansas counties. Ken owns a fleet of 18 ambulances that work across the entire state, and he employs more than 100 people, including 68 frontline EMTs and paramedics, 32 part-time staff and 8 emergency dispatchers.

When Ken bought the company from the Rural/Metro Corporation, he promised to deliver “world class care with hometown values” to Arkansas. According to Ken, at the time, Rural/Metro was a large company and everything was driven by the bottom line. But the people in the local community wanted a more personal touch from their emergency service provider.

“They wanted paramedics to show up as their neighbors, not people assigned by corporate to do a job,” Ken says. “Here in the South we like to know each other. And even in small rural communities, we can still provide world-class care.”

Ken has run ProMed Ambulance with these values at the heart of the operation.

“I’m a paramedic with the responsibility of payroll,” he says with a smile. That’s because whenever there’s a large disaster or need for an extra medic, Ken will work the frontline himself, usually as the chief medical incident coordinator.

Throughout his decades-long career, Ken has worked car accidents, bus crashes, private plane crashes, and hurricanes. He’s responded to broken bones and heart attacks. “There’s not a paramedic alive that won’t tell you the adrenaline rush is not part of our psyche,” he says. “It’s exciting responding to an emergency and knowing that you can help bring that emergency to a close.”

Ken remembers responding to a young mother, who had given birth to her first child only a few days earlier, when she suddenly went into cardiac arrest. “The mother had just come home from the hospital a few days ago,” Ken recalls. “The dad was holding the newborn. He says to me, ‘You’ve gotta save my wife.’”

On the way to the hospital, Ken and his coworker gave the woman CPR. “She survived,” Ken says. “And she came by the station later to thank us. But that incident really stands out in my mind, because I saw new life in the baby while at the same time I saw life leaving the mom.”

Despite the adrenaline that always surges through his veins during an emergency, Ken is able to keep his cool. “The training always kicks in,” he says. “That’s how I can follow the steps to solve the crisis without letting emotions derail me.”

Ken calls it the ‘windshield assessment.’

“You drive up to the scene and assess what’s going on out your window. You get out your emotions about how awful it might be. But then you step out of the vehicle and you do what you know how to do: you contact the mutual aid agencies and the hospitals. You bring the human resources you need to the scene and use technology to manage the incident,” he says.

Not too long ago, Ken served as the medical incident commander at a passenger bus crash. A Greyhound was carrying a busload of special needs children to camp when it was hit head on by an 18-wheeler. There were lots of injuries to the passengers and the driver was entrapped in the bus. Worse, the accident occurred in a very rural area, so it took an extensive period of time to get all of the resources there and more than three hours to clear the incident.

“I had to direct the other incoming ambulances, manage all the rescue resources and figure out where people would be transported for care,” Ken explains.

The incident brought many agencies from different areas together to work the scene, so Ken set up a dedicated Zello channel for coordinating the response. “This freed up the radio frequencies,” he says. “Just because there’s a bus accident on one side of the county doesn’t mean there isn’t a heart attack on the other side of town. So I managed the response on a TAC (talk around channel) channel for this emergency. We kept the hospital informed on this channel and sent photos from the scene to the hospital. By communicating on Zello, we didn’t bog down the rest of the emergency radio system.”

Ken found Zello four years ago after conducting extensive research. He was looking for a communications platform that would bridge his company’s extensive use of cell phones with the land-mobile radio systems that his industry relies on.

“We tried every push-to-talk application that has ever come out,” Ken says. “They all worked great but they didn’t help us enough because we’re very radio based. I needed a land-mobile-radio solution and I finally found it in Zello. It has totally revolutionized the way we communicate in our company.”

ProMed Ambulance now has 13 channels, including one that is connected to the 9-1-1 center in each of the seven counties the company serves. Plus, there are additional channels set up to respond to various incidents.

“There are a lot of radio channels to keep up with, but with Zello, I can manage all my operations from one central dashboard,” Ken explains.

He says that finding Zello has saved the company a lot of money. “Instead of having to invest millions of dollars in portable radios for every employee, everyone has their own personal ‘radio,’ which is their cell phone.”

Because Zello is widely used by emergency responders, ProMed Ambulance is able to cross-link with other groups when they’re responding to the same scene. ProMed is a FEMA contractor, and so Ken’s employees work out of state emergencies as well. During Hurricane Harvey in Houston, ProMed cross-linked with rescuers from Cajun Navy so they could all combine their collective knowledge to provide the most effective response possible. 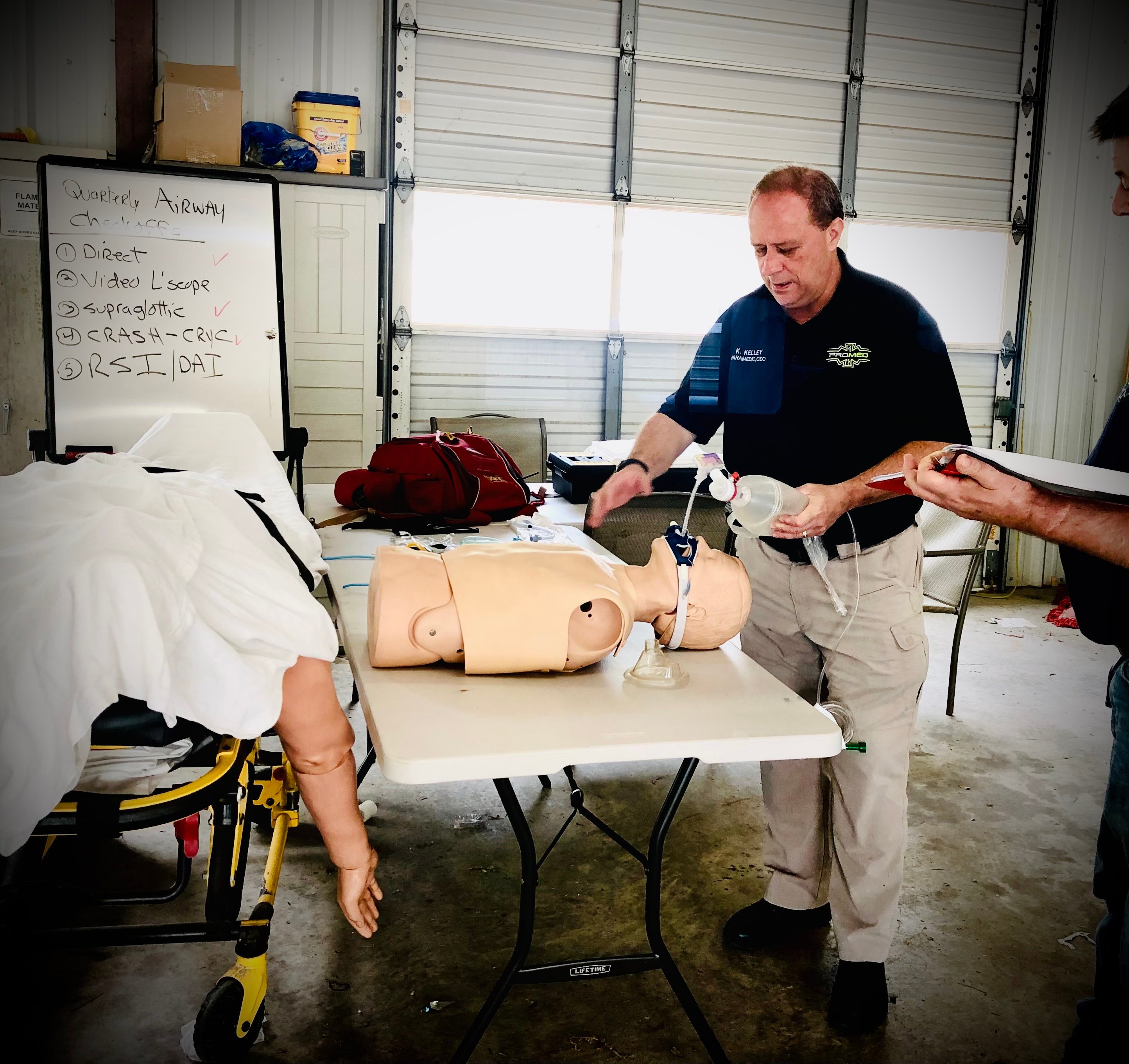 Over the past two decades, Ken has added three lines of business to his company. In addition to providing traditional ambulance response, ProMed Ambulance also has a  training academy for EMTs and paramedics (ProMed TEC), a medical alarm monitoring service called ProCare+, and a department that handles billing for other ambulance companies.

Ken opened the ProMedTEC training academy in an effort to train his own workforce.

“These days, people can go into nursing or other health-related jobs and make three times the money,” he says, and then references his television heroes. “You have to have the Johnny and Roy adrenaline drive to want to do this and there are only so many people like that.”

ProCare+, the in-home and mobile GPS medical alert device monitoring arm of Ken’s business, stemmed from what Ken saw on the ground with patients who needed monitoring, whether due to a recent surgery or an ongoing medical issue.

“A person who has had knee surgery might need a monitor for a month or two as they recover,” Ken explains. “But an elderly person might wear a monitor at all times. Either way, if a person falls and can’t get up, they press the button on the device which enables two-way communication. And if needed, a ProMed Ambulance will visit the scene.

“This winter we had an unprecedented winter storm in Arkansas. Seventeen inches of snow!” Ken says. “A lady went down her back steps to feed her dog. She fell on the ice and broke her hip. Fortunately, she was wearing the monitor. Even though the power lines were down, the devices have battery backup. She pressed the button and we got her.”

Ken has also developed an expertise that can help other ambulance companies thrive. He says that often people are under the impression that if they call an ambulance, it’s funded by the city or town just like the police or fire department. But this often isn’t the case; ambulance companies are frequently private enterprises. Because of the confusion, though, it can be hard for ambulance companies to collect their fees after providing service.

“We’ve been in the business more than 30 year. We have the expertise, the connection to the payers and the policymakers,” Ken says. “We know what it takes to get the claims paid, so we help the other companies collect and that way they can continue their important emergency response work to save lives.”

Even though it’s been 36 years since Ken started watching the show “Emergency,” don’t think for a second he’s forgotten Johnny and Roy. “I have all the DVDs,” Ken says. “That show was the catalyst for what modern emergency medical services are today.”

According to Ken, the TV show inspired states and communities to think through how they organize their emergency response systems.

“Our company uses technology to do good medicine and bridge the gap between the pre-hospital and hospital,” Ken says. “That’s exactly what Johnny and Roy did, and that’s what we try to do every single day.”