Zello Announcement
The Zello mobile app for personal use saw meteoric growth during the fall's various natural disasters. We were overwhelmed - emotionally, not technically - with the scale of Zello's adoption and the users' voices of gratitude. We know for certain that our app was instrumental in the saving of many lives during Hurricanes Harvey, Irma and Maria, the California wildfires and the Mexico earthquake. It's a source of tremendous pride for us.


During the hurricanes, Zello rose to the #1 spot in both the Google and Apple app stores, and stayed there for nearly two weeks. Obviously we understood that position was due to the misfortunes of many people, but it was still exhilarating to know that so many people were turning to us.

With the millions that joined us this fall, Zello now has over 120 million users worldwide!

Zello, our paid app for work teams, also saw very healthy growth this year. We had particular success in hospitality, where we added a large number of hotels and resorts, and in retail, where among other new clients we won the business of the world's third largest retailer. And the many varieties of trucking and transport remained our strongest market segment.

With input from our clients we added significant new capabilities to Zello.

Ad Hoc Channels gives Zello users the ability to create their own group conversations in the moment, without involving the network administrator. These channels endure only as long as the conversation, and then go away.

Location tracking provides administrators with a real-time view of their Zello users in a scalable map. 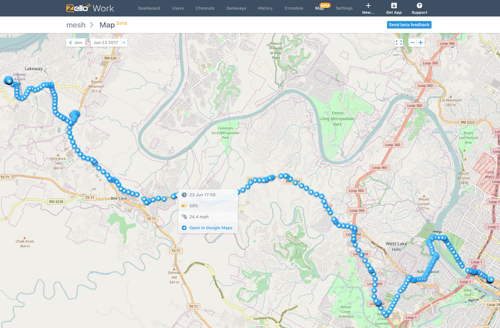 An overhaul of Zello for Apple iOS, with an entirely new user interface and user experience.

And for dispatchers, very helpful new Unanswered Calls functionality in the Windows PC version of Zello.

With all of this growth in the business you won't be surprised to know that we also added a number of really talented people to our team. We built out the ranks of both our technical and business teams, and we still have roles to fill.

While we are proud of our accomplishments, we absolutely understand that none of it would have happened without the support and patronage of the worldwide audience for our push-to-talk solutions. For that we owe all of you a huge debt of gratitude.