A lot has changed in the world since March of 2020. As the novel coronavirus has swept across the globe, government lockdowns have dramatically affected economic activity. These measures have loosened and tightened based on changing infection rates, and have varied widely across both national and state governments.

Throughout the pandemic, Zello has thrived. Our revenue has increased steadily, continuing to make Zello the success story it is. In the overall, zoomed back picture of Zello, associated success metrics, such as the volume of messages sent, also increased throughout the year. What's remarkable is that this has been the case despite the fact that many of our Zello Work paid customers operate in frontline industries, which have been disproportionately affected by the pandemic.

We were interested in seeing how activity on Zello within these industries dovetailed with or diverged from both national and state data within the U.S. for economic activity within these same industries, and how that in turn related to varying government disease mitigation policies. We also wondered if we could find any companies that bucked the trend within struggling industries, and what, if any, company policies had proven helpful to workers operating on the frontlines. And in all of this, we were curious to see how, despite these declines, frontline industries still contributed to Zello's overall success.

To gather this data, we dug into our own backend, conducted a survey of over 3800 people, and talked directly with our customers. The findings confirmed a lot of what we knew, and also surfaced a few surprises.

The eight industries we focused on were Materials Handling, Construction, Delivery, Freight/Trucking/Logistics/Warehouse, Healthcare, Hospitality, Retail, and Taxi and Limo Transportation. We compiled data for all of 2020, using January as our reference point. January typically represents a normal level of activity on our platform. Here’s what we saw. 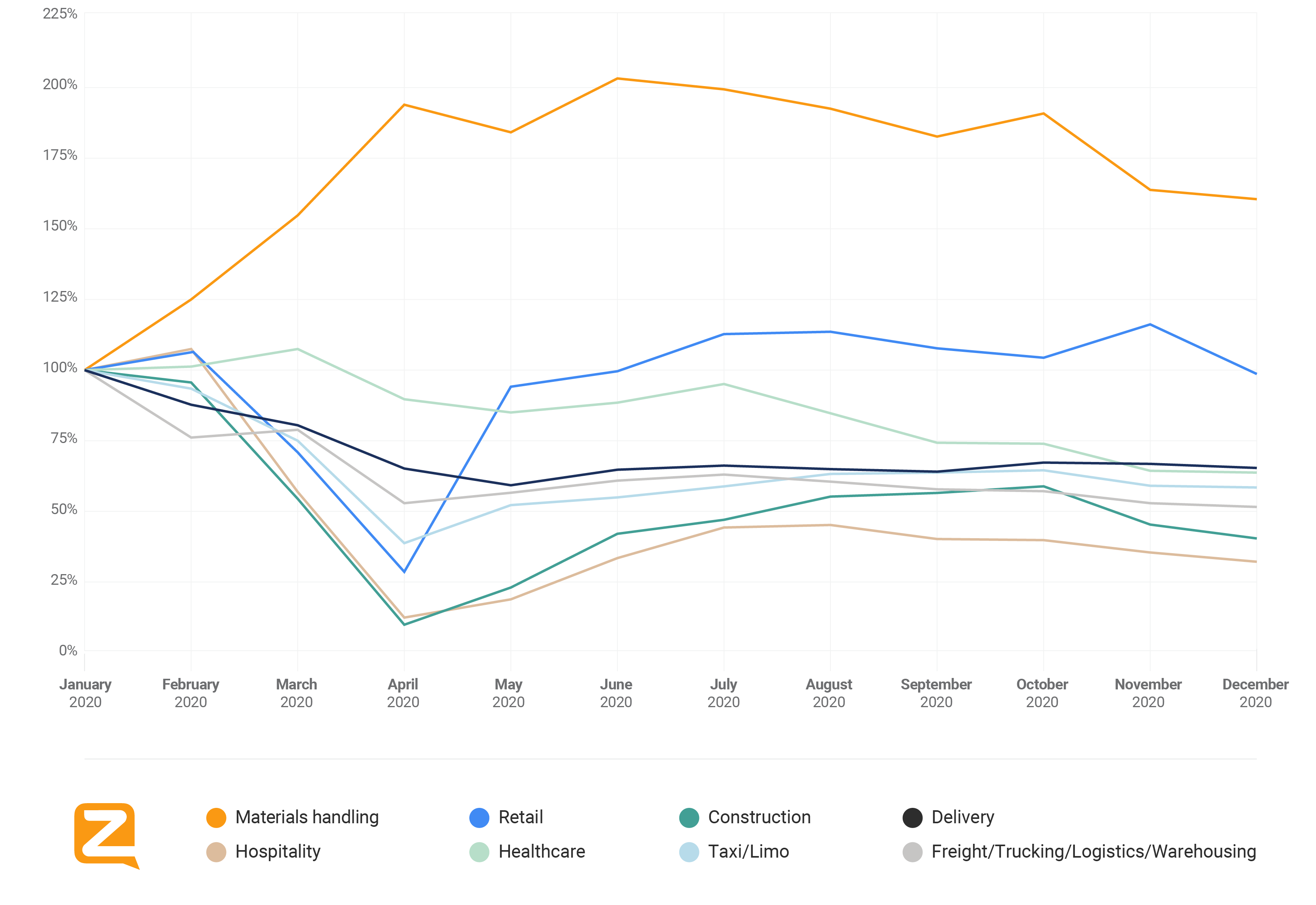 There were many deviations from the typical activity levels Zello sees from these types of customers. The details are below.

Let’s focus on the industries that were more dramatically hit by the pandemic: Hospitality and Construction.

Activity By Market: Hospitality and Construction 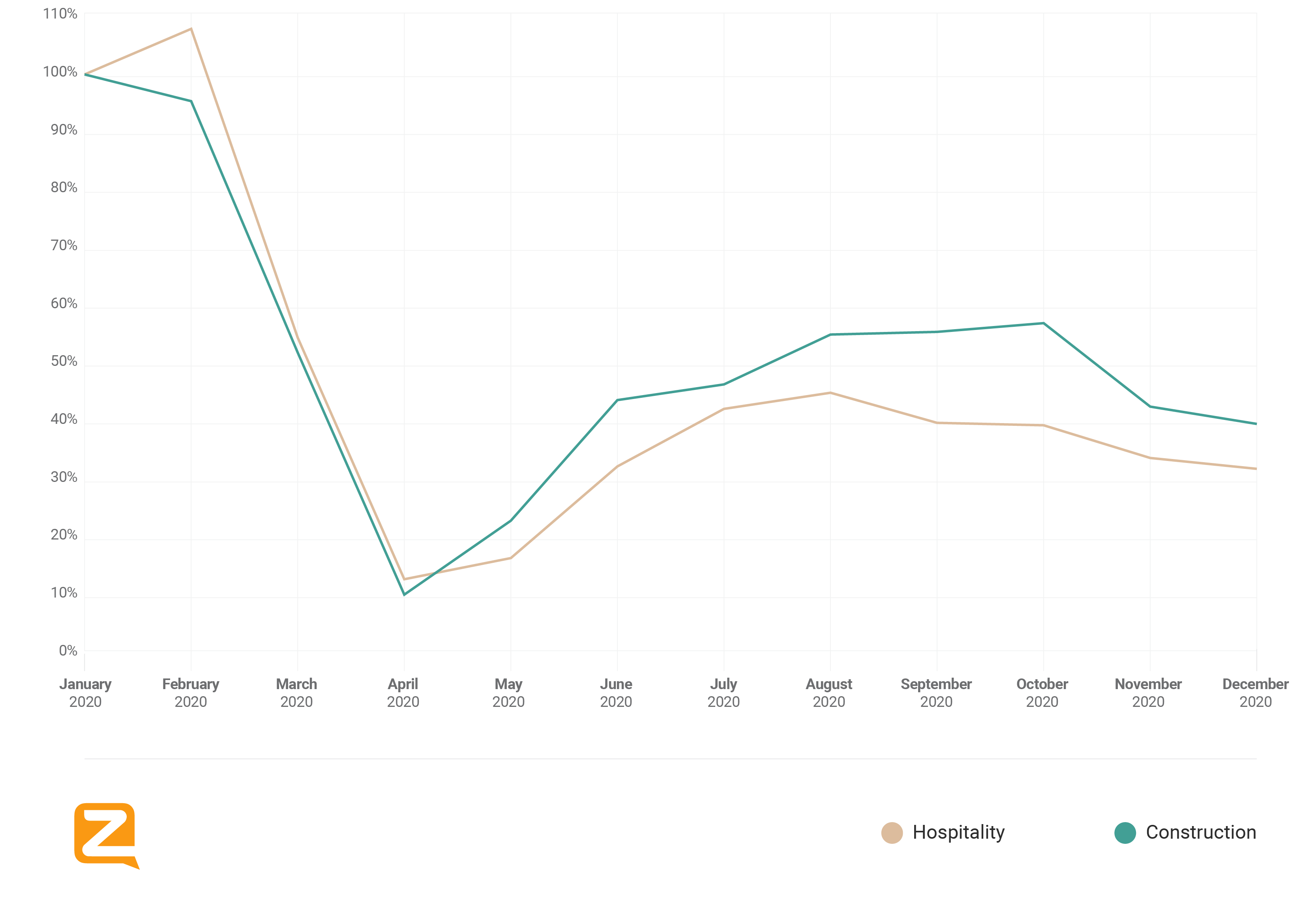 Both industries saw dramatic declines in the number of messages sent between January and April. Members of the Construction industry sent just about 10% of the normal amount of messages on Zello in April than they did in January, while the Hospitality industry dipped to just 12% of their normal numbers. There have been slow and steady increases since then, but neither industry is back to normal. At its peak in August of 2020, Hospitality was at 45% of its typical numbers. In October of 2020, Construction was at 59%. They have both seen declines since then.

These findings are largely corroborated by research into larger industry trends. The Hospitality industry has been one of the hardest hit industries throughout the pandemic. In a survey by the American Hotel and Lodging Association, 59% of respondents reported that without federal funding they would be unable to keep their doors open through the end of 2020, 71% wouldn’t be able to survive another 6 months, and 77% would be forced to lay off more workers.

According to an analysis by Deloitte, the Construction industry was similarly hard hit at the beginning of the pandemic, losing $60.9 billion in GDP. Jobs in the industry decreased by roughly 6.5 million. Recovery for the industry has been mixed, depending largely on whether they were connected to other industries that were deeply damaged by the pandemic. For instance, a construction company that did most of its business with the Hospitality industry would be more seriously affected than one that built office buildings. These conclusions may explain the recovery we’ve seen on Zello, as well as the muted nature thereof. 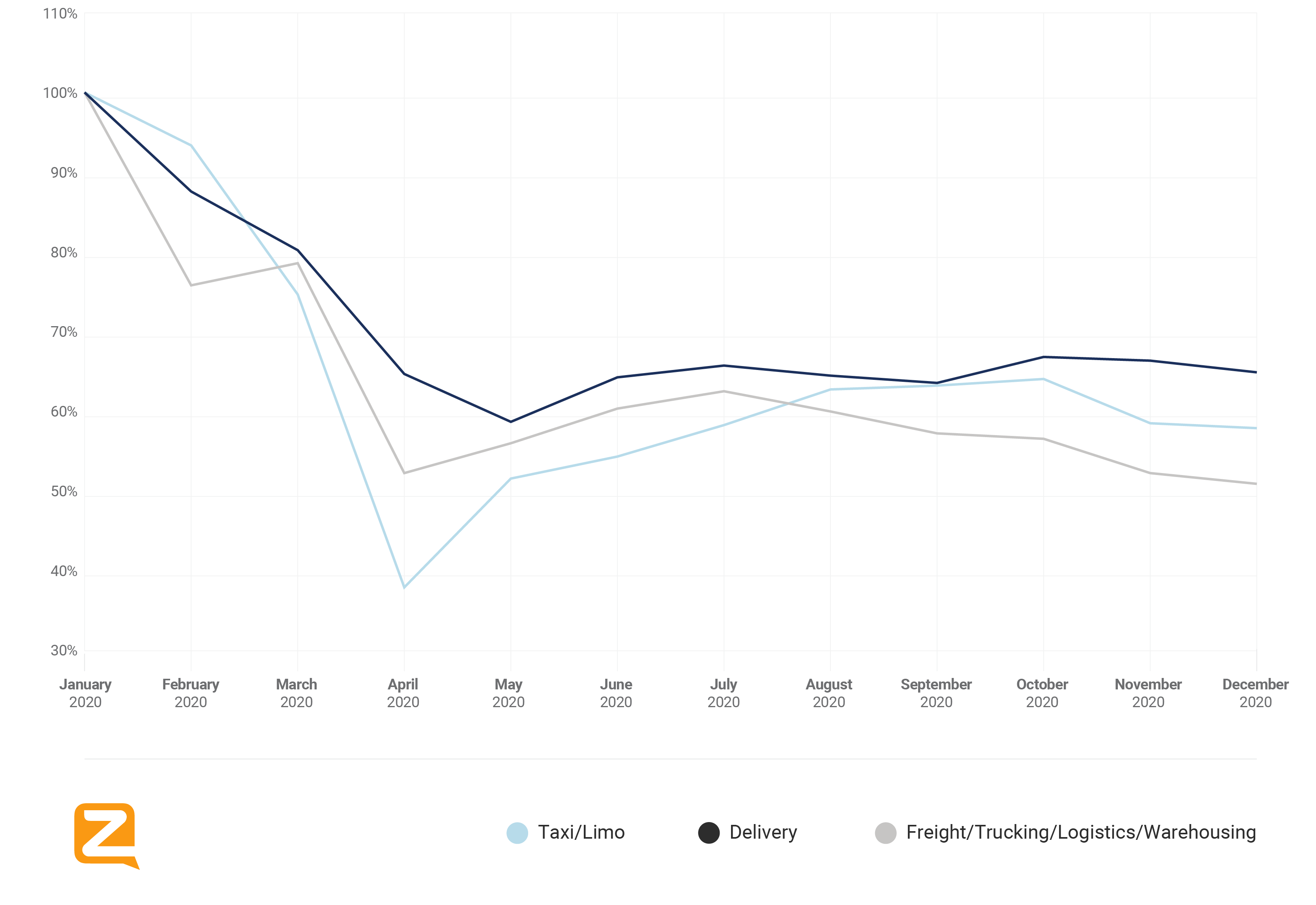 Unsurprisingly, all three industries showed dramatic declines between January and April of 2020. The Taxi/Limo industry seems to have been hit the hardest, sending just 39% of its typical messages in April. Delivery continued to decline into May, while Freight & Logistics and the Taxi/Limo industries were clawing back gains beginning in April. These gains were measured for the Freight & Logistics industry, lasting only until July before beginning a steady decline, though it was nowhere near as jagged as that initial January to April decline. Delivery has remained more stable since its recovery. This may be attributed to the overall relative health of the industry throughout the pandemic.

Still, none of the three industries is close to its norm. As of December 2020, Delivery was at 65%,Freight & Logistics was at 51%, and Taxi/Limo was at 58% of their typical number of messages sent. For the Taxi and Limo industry, this is in keeping with what the Business Research Company forecast for the industry worldwide (source), with an expected dip in the Compound Annual Growth Rate from $83.0 billion to $46.7 billion. 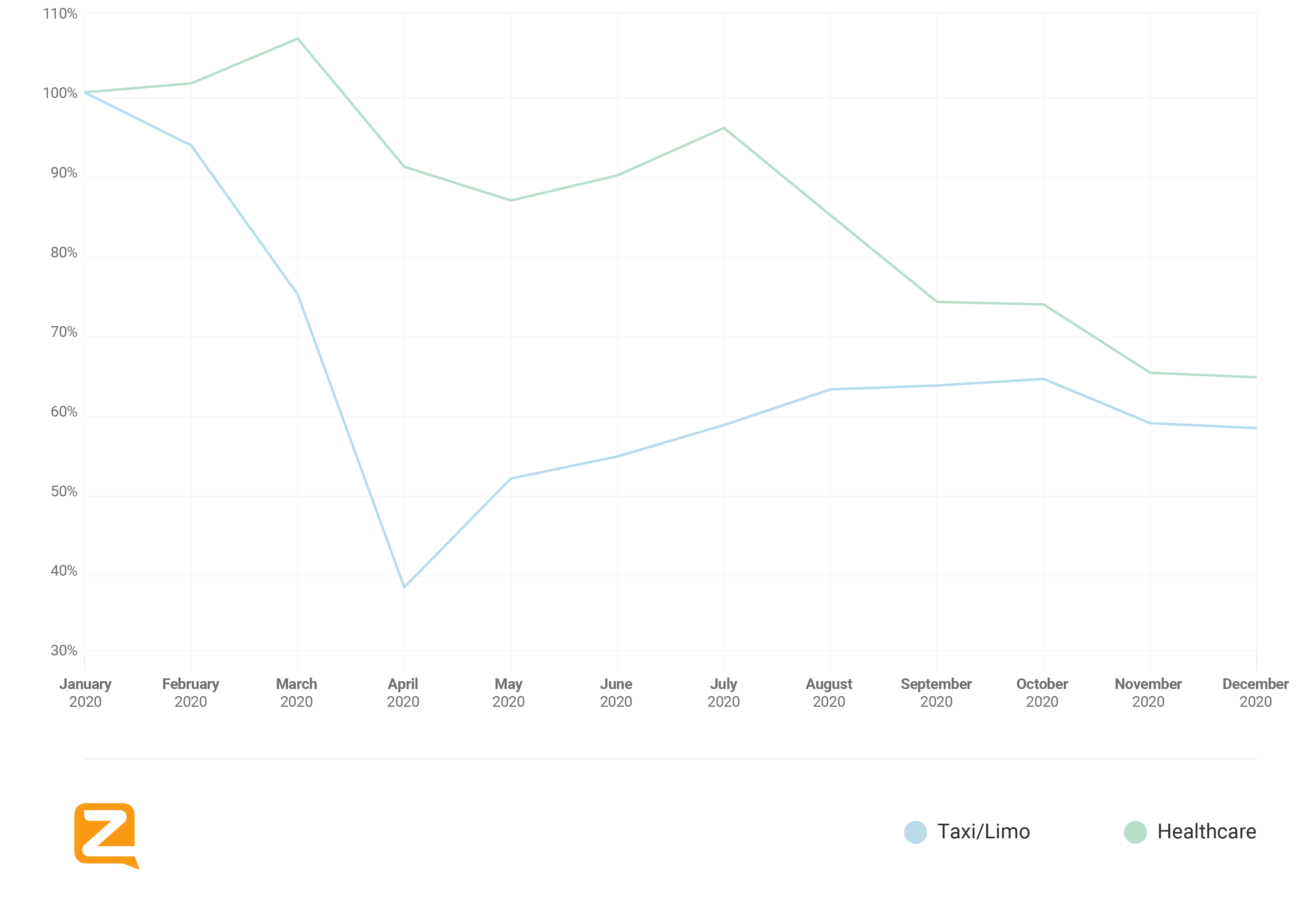 The number of messages sent for the Healthcare industry on Zello (shown here next to data for the Taxi/Limo industry as a comparison point) exhibited an overall decline throughout 2020, with only a brief increase in June. This graph looks different than any other we plotted. There is the universal decline from March to April, though it’s not quite as jagged as in other industries, remaining at 89% of its normal levels in April and 84% in May, before increasing to 94% in July. Not bad at all—except that a steady decline continued from there, ending the year at 64% of normal levels.

Given the Healthcare industry’s central role in addressing the pandemic, these initially healthy numbers shouldn’t be surprising. The greater declines can be explained by the makeup of Zello Healthcare customers. While hospitals and emergency rooms are present, many of our healthcare customers operate within nursing homes, labs, pharmacies, and in practices that offer elective procedures, which have seen drastic cuts over the past year as patients avoid non-essential services. 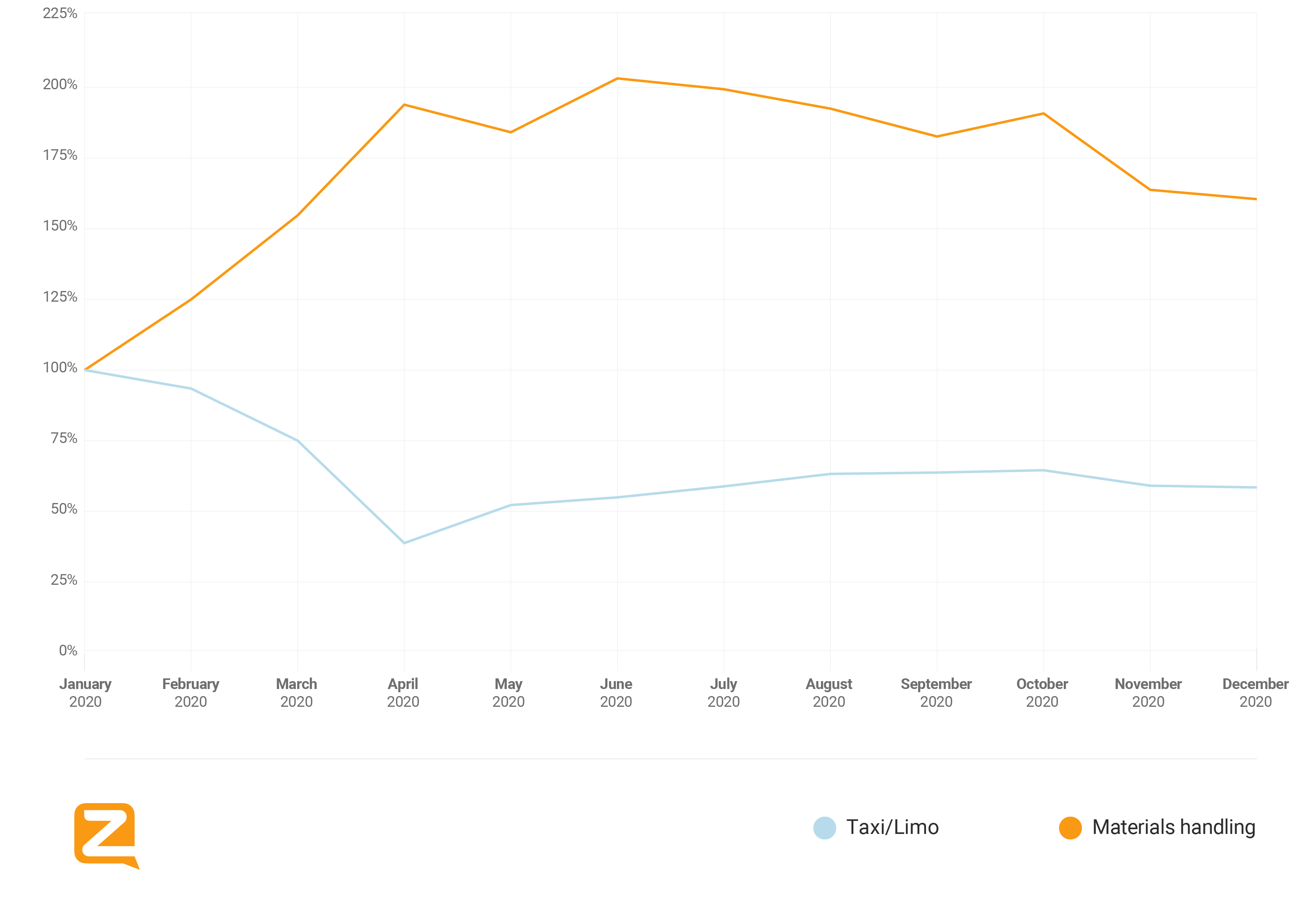 One ray of sunshine over the past year was Materials Handling. Numbers here swelled to 202% of its typical numbers by June 2020. Rather than declining in the beginning of the year, the number of messages shot up between January and April. There have since been declines, particularly between October and December, but this can largely be attributed to the holiday season.

Perhaps one of the most interesting stories was what happened with Retail. Like most other industries, it declined rapidly from February through April, reaching a low of 28% of the typical number of messages sent. But it had shot back up by May to 94%, and even exceeded the typical numbers at 116% in November. Interestingly, many Zello customers in this category are within the Home Improvement and Home Décor realms, as well as Automotive. This relative health, then, may be attributable to less dependence on store fronts and to riding the home improvement trend that has become so popular among consumers stuck at home.

While both states drop in early March, California’s decline is steeper than that of Texas. By April 2020, California was at just 36% of the typical number of messages sent, while Texas was at 65%. California then saw a steady increase and plateauing of activity, at around 58% of normal activity in September through November, before slight declines towards the end of the year.

Texas never reached California’s low, showing instead a more gradual decline with some minor increases in June and July. It began to run about parallel with California’s declines starting in September of 2020.

While we can’t be certain whether state lockdown policies and COVID’s various waves affected activity on the platform, there seem to be some correlations. California’s jagged dip between March and April, for instance, as opposed to Texas’ slower decline, does seem correlated to California’s stricter lockdown policies. California began reopening in early May and continued throughout the fall, but did so at a slow rate, which is largely reflected in the steady but not jagged increase in activity on Zello. The declines beginning in October may be due to COVID’s second wave and a rolling back of lockdown measures.

In Texas, Governor Abbott instituted restrictions in March, though they weren’t as tight and didn’t continue for as long as they did in California, a fact that is reflected in the state’s activity data.  Abbot began to reopen retail stores, malls, restaurants and theaters on May 1st at 25% capacity (source). Reopenings steadily continued in the state throughout the summer and fall, expanding to more sectors and with increasing capacities. However, the number of messages sent in Texas has continued to decline, albeit slowly. This makes it difficult to tell whether these differences are due to the continued effects of local local lockdown measures or even the toll of the pandemic itself, or if these are perhaps seasonal fluctuations, adjusted for the already lower numbers given the effects of the pandemic.

What Frontline Workers Are Saying 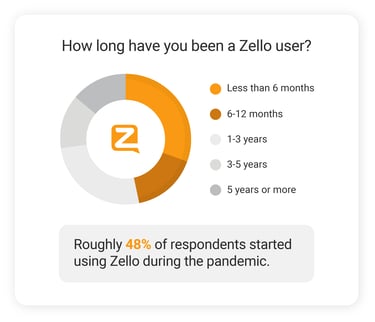 We were curious how this activity synced up with what our users reported about their own usage throughout the pandemic. As such, we surveyed over 4,000 users across 113 countries, from the United States to South Africa, Palau, and Egypt. Of these respondents, 32% had started using Zello within the past 6 months, and 16% had begun with Zello in the past 6-12 months, accounting together for roughly 48% of the respondents.

That means Zello was a post-COVID discovery for many of the respondents. Zello is also a trusted means of communication during the COVID era. Among the respondents, 32% reported using Zello either significantly or somewhat more during the pandemic, while 43% reported using it the same amount. This supports the anecdotal reports we’ve seen here internally from our customers that Zello is helpful in facilitating socially distant work, as well as reports that Zello is deeply trusted when it comes to reporting an emergency.

The majority of respondents, 70%, either were not working from home or had returned to work if they had previously been at home. This, again, largely fits with our data on Zello activity within frontline industries. It also syncs relatively well with state lockdown statistics, which prioritize frontline work first in considering lockdown exemptions and reopenings.

But if you’re at home currently and don’t know when you’ll be returning to work, you’re not alone. A third of respondents didn’t have a return date, and for those who do, plans are uncertain.

Precautions such as frequent disinfection and flexible hours are helping workers navigate work-related difficulties during COVID. However, despite these new work policies, 17% of people say that no policies have helped.

Putting it All Together

The COVID-19 pandemic has hit many industries hard, and others less so. The number of messages sent on Zello correlates closely with the health of these industries. If they’re thriving on Zello, they’re thriving in their business. The fact that Zello itself not only continued to thrive but also make significant gains as core customers were tested and strained attests to Zello's central role as essential tool across these industries and to the diverse industries in which Zello plays a similar role. We can only imagine what these numbers will look like when frontline industries aren't fighting so many head winds. We wish everyone luck in the new year!