John Marcel of Concord, New Hampshire calls himself a Fire Buff. “That’s my hobby, my career, and pretty much my life—just ask my wife, she’ll tell you,” says Marcel. Outside of his career at Concord Fire Dispatch, Marcel spends his free time working with NH Fire Radio, a small community of buffs who make it their business to broadcast conditions of nearby New England fires. Says Marcel, “2-Alarm fire, 3-Alarm fire, 4-Alarm fire…the bigger the number the bigger the more complex the fire and you need that many trucks to come in and help out.” 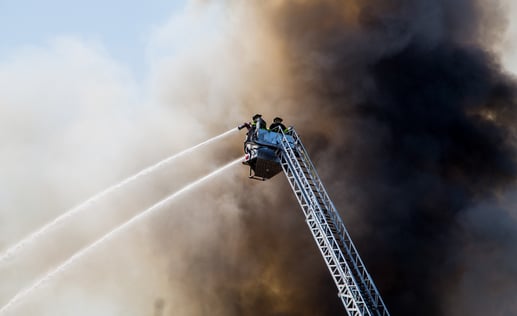 Zello push-to-talk—walkie-talkie style communication via mobile phones—gives these regular buffs the instant information they need to react in an emergency. Marcel explains, “You have a guy who’s near the scene of one of these fires, who goes to it and can actually report back, ‘How’s it going? Is it big? Is it out of control? Does it look like they’re getting a handle on it?’”

Important distinction: NH Fire Radio is not a firefighting association. They’re fire professionals who have special interest in Fire Service Operations. They seek out “the more interesting stuff” and go to sites “to observe and appreciate what [firefighters] do.” They’re also a media operation, letting fire photographers know where the blaze is and whether it’s safe to go in. And when asked, fire buffs are support teams for area firefighters. Marcel sees this function as the future of fire-buffing, explaining that nearby Boston and Providence have already begun to form small rehab units. "[These are] volunteers that are just going in with the idea, ‘Get the Gatorade to the firefighters; Get the coffee to the firefighters."

In the 80’s, buffs worked relying solely on two-way radios—and liked it that way. “We’re two-way radio people,” says Marcel. “Right now, when I go in my other room from where I’m sitting, we get on radio, and we talk out over a radio.” But since January, Marcel and his group have fallen for Zello. “It takes what we know and what we’re used to and makes it into a modern unit,” he says. “It’s basically a two-way radio on a much cooler platform.” For NH Fire Radio, Zello takes their favorite “Old-School” radio style communication and gives them what they need today—private channels, password protection and worldwide broadcast on their own lightweight phones. Armed with modern push-to-talk, Marcel and NH Fire Radio do their jobs easily and well, broadcasting and dispatching faster than you can say…“Fire.”

Zello Used for Mine Shaft Rescue