5 Reasons Network Radios And Zello Are The Perfect Match

At Zello, we are committed to maintaining our leadership in push-to-talk by teaming with a variety of device partners. Though Zello is most commonly used on consumer devices like smartphones, we are compatible with network radios.

Handheld network radios look and function like traditional two-way radios (a.k.a walkie-talkies, DMRs, or ham radios). But, instead of using UHF/VHF frequencies to connect, they connect via the Internet using a SIM card or Wi-Fi signal.

Mobile network radios have a number of advantages for use in noisy outdoor environments like construction sites, manufacturing plants, and transport truck cabs, including:

Instead of a smartphone, some users opt for a network radio transceiver. Featuring large buttons and knobs that can be mapped to Zello functionalities, this is a great solution for deskless workers, such as drivers and construction workers, who wear gloves or operate a vehicle and can’t take their eyes off the road, as it removes the need to fumble with an unlock screen or any other paired accessories.

Network radios cost as little as $75. Paired with the Zello network radio app, which is free, companies can outfit their teams for 80 percent less than if they purchased digital two-way radios or smartphones.

Network radios are made to stand up to the elements. The best  are even waterproof. No need to worry about drops or falls. The best network radios can take a beating in demanding outdoor environments.

These devices are intended for construction sites, factories, and the road. While smartphones can be hard to hear, network radios. They provide clear audio at high volumes in situations with a lot of background noise without the use of accessories like external microphones or earpieces. 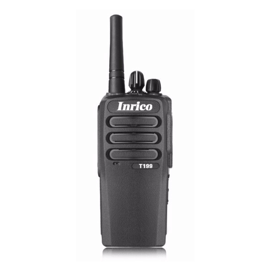 Network radios have a much longer battery life than a smartphone. Our tests show that network radios running Zello can operate for up to three days before needing a charge, an important feature when the power is out or when there isn’t convenient outlet access.

Many workplaces can benefit from adopting network radios with Zello push-to-talk. In addition to the cost and dependability of these devices, they provide a dedicated walkie talkie for workplace communication that can be shared between shift workers, enabling seamless team communication.

“On a customer visit this summer, I learned that Zello deployed on network radios is completely replacing traditional two way handheld radio communications at a fraction of the cost,” said Bill Moore, Zello CEO. “These radios have really enhanced workplace productivity. Additionally, Zello allows employers to easily configure their networks and track and archive usage via its Web-based management console.”

Network radios let users communicate on multiple Zello radio channels without the distance limitations of traditional two way radios. By adding Zello to mobile network radios, users can access the app’s extensive and established user base or opt to use the company’s private radio networks with Zello, which offer the benefits of a configuration console, map history features, and message archives, among others.

How To Get a Network Radio with Zello

Network Radios is currently offering network radios with Zello pre-installed. Users can also install Zello on new or existing network radios including the Inrico T199 and the Talkpod N-50 (though the Talkpod N-58 is not recommended). To install, connect your network radio to your computer, sync it with an Android screen viewer (such as Vysor), then download and sign in to Zello. Vysor mirrors the device’s screen to your computer, allowing you to navigate the Android home screen and Zello UI.

The push-to-talk space is a genuine ecosystem, with services, data, and devices requiring true collaboration to deliver meaningful solutions to customers. Zello is dedicated to building relationships across the industry so more users can enjoy turnkey push-to-talk products like those offered by Network Radios.

Where to Purchase a Network Radio

As you may know, Zello does not sell hardware. You can purchase network radios online from the manufacturer or from any reputable reseller in your area. A few sites include Network-radios.com and .shop, for instance.

We are happy to hear any user stories or feedback you have about network radios or other devices. They're still new to us and we are still learning! Feel free to reach out to share your story with us.