When Sim Shain was 7 years old, his father would run out of the house in the middle of dinner to help save lives. Mr. Shain was a founding member of the Lakewood, New Jersey emergency rescue organization called Hatzolah, and Sim decided that when he grew up, he would join Haztolah, too.

An all-volunteer emergency rescue organization, Hatzolah operates in areas where Orthodox Jews live. The idea is that while tending to emergencies, Hatzolah EMT and paramedics can be especially attentive to the cultural and religious needs of Jews. For example, some of the patients only speak Hebrew or Yiddish and the responders do as well. When tending to an emergency, the responders are careful to provide modesty to religious women and not cut religious garments off of men.

Hatzolah is the largest all-volunteer ambulance service in the US. Although the organization has special skills to serve the Jewish community, it provides premium quality pre-hospital emergency medical treatment and medical transportation at no cost to all who need it, regardless of race, religion or ethnicity.

The Hatzolah team at Kotel (the Western Wall), providing medical assistance to children and young adults with physical disabilities on a week long trip to Israel with The Special Children's Center in 2019.

Sim first joined the organization after he became an EMT in 1993. While an EMT can give basic life support, oxygen and some medications, Sim wanted to be able to offer his patients more, so in 2007 he got certified as a paramedic. This enables him to give more advanced life-saving treatments. Today, Sim is the Advanced Life Support Coordinator of Hatzolah of Central NJ and the Operations Coordinator for Hatzolah Statewide.

“For Hatzolah Statewide, we needed a radio system that works over the internet,” Sim says. “Zello works perfectly for us because we can expand and broaden our network anywhere. Yesterday I was flying to Houston and I could communicate with our team from 35,000 feet, which is something I could never do otherwise.”

Sim tells me that while the average emergency response time in the US is 15 minutes, Haztolah aims to respond in two minutes. “Every day we use Zello to save lives,” he says.

Just recently, a call went out over Zello to the members of Hatzolah Statewide. Did anyone happen to be near a particular park in Pennsylvania? There was a child with a peanut allergy going into anaphylactic shock.

Members of Hatzolah Statewide rallied to save the child’s life.

“We had 3 members respond in under 5 minutes. We were able to stabilize the child and assist the mom until 911 took them to the hospital,” Sim says. 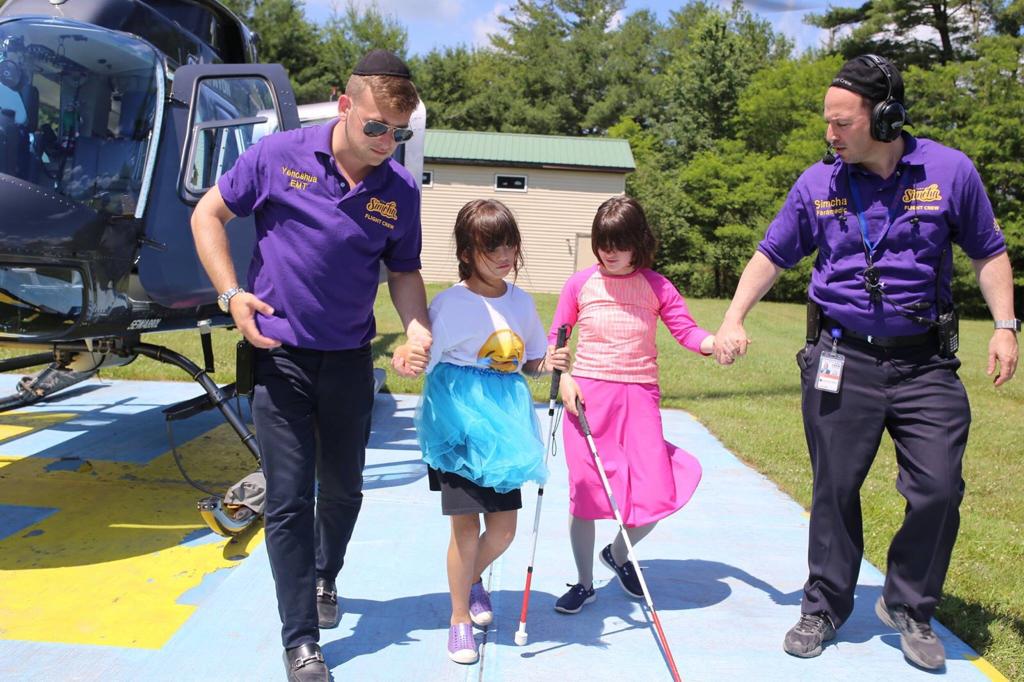 Providing medical and ground support  to Lev Shlomo as they sponsor helicopter trips for the amazing children of Camp Simcha, a medical camp for children with cancer and disabilities

As with many Americans, September 11th changed Sim’s life in many ways. On that day in 2001, he was in his home in New Jersey. After the second plane crashed into the tower, Hatzolah of Lakewood contacted the New York City Hatzolah to see if they needed backup.

While all of New York’ Hatzolah’s 25 ambulances headed to Ground Zero, the New York organization asked if Hatzolah of Lakewood could answer calls in Brooklyn. Sim headed there, but once he arrived, he hopped on a New York City Hatzolah ambulance to head to Ground Zero. He spent the day helping flush dust out of the eyes of police personnel who couldn’t see because the dust was so thick. And he helped give them oxygen, because many couldn’t breathe due to smoke inhalation.

While Sim spent a whole day at Ground Zero, his good friend Steve Zakheim spent an entire month working with first responders there. Like Sim, Steve was also a volunteer with Hatzolah. Plus, he owned an ambulance company in New York. On 9/11, fourteen of the workers in his company died at the twin towers. Sadly, as time passed, Steve developed cancer as a result of exposure to toxins at Ground Zero.

Steve was an avid pilot with his own jet. One day, he called Sim to his room at Sloan-Kettering Hospital in New York. When Sim arrived, Steve told Sim that as his dying wish, he would like Sim to take his plane and start an aviation rescue company.

Sim did start the company, which is called ParaFlight EMS and Aviation. The company conducts air medical transports, with a primary focus on flying teams of surgeons to deliver hearts, lungs and other organs to people in critical care.

Providing medical support on a private jet to Israel in 2016 for a young man on a ventilator who wanted to explore and experience 10 days in Israel.  The jet was provided by and accompanied by philanthropist Shlomo Rechnitz of Los Angeles.

One thing is clear: Sim Shain is just like his father in that he’ll drop everything at any time to save a life. If a call comes into Hatzolah about someone who needs a rescue across the country, Sim will use Zello and his planes to facilitate it. There’s really no boundary between his day job and his volunteer work. It’s all part of who he is: a rescuer.

Today Sim is 48 years old and has a wife, 6 children and 2 grandchildren. He tries to teach his children that in life, we need to give back and help others.

“Everybody should be able to find something that they can do to make someone else’s life a little better,” he says. “What we give is really what we get. And the most rewarding thing we can do is save a life.”

Sim’s 13-year-old son got the message. He plans to follow in the footsteps of his father and grandfather and one day join Hatzolah, too.

Why Social Features Have Been Removed From the Free Zello App