Uruguay, the second smallest country in South America, is known for its high quality of life and socially progressive values. It’s no wonder that migrants arrive in droves from other countries like Venezuela and Cuba in search of a better life. 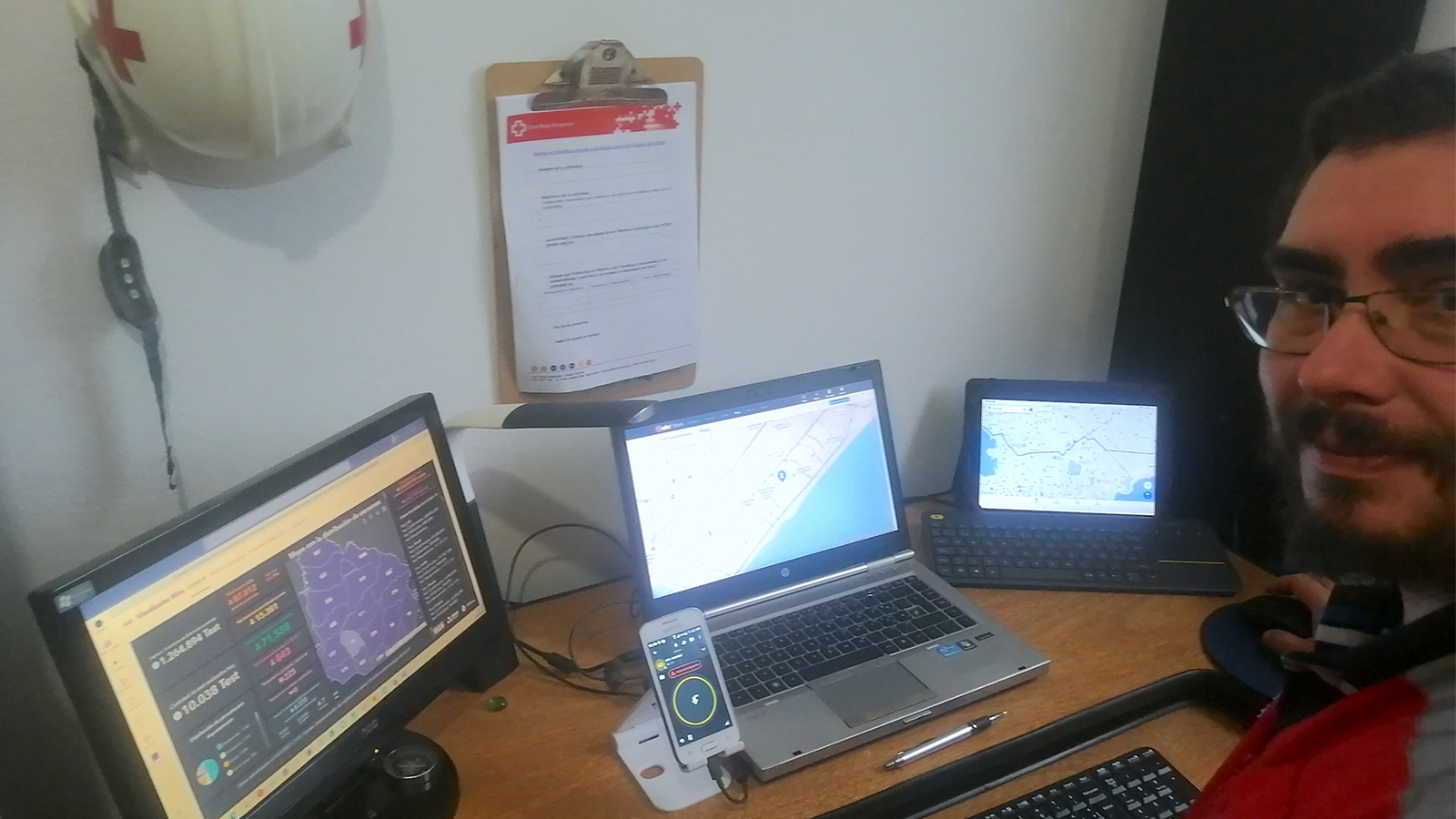 Luckily for many who come to the seaside capital city of Montevideo, Pablo Capeluto and the volunteers with the Montevideo Subsidiary of the Uruguayan Red Cross are waiting to welcome newcomers with open arms.

The Montevideo Subsidiary of the Uruguayan Red Cross is part of the International Red Cross and Red Crescent Movement, which is the largest humanitarian network in the world. The movement has a network of 97 million volunteers in 190 countries who are devoted to protecting the health and well-being of vulnerable people.

Amazingly, the establishment of the Red Cross in Uruguay (Cruz Roja Uruguaya) dates all the way back to 1897. And currently, there are more than a dozen different subsidiaries of the Red Cross within the country.

As the president of Montevideo Subsidiary of the Uruguayan Red Cross, Pablo coordinates an average of 25 to 65 volunteers. While this is like a second job for Pablo, it’s definitely his passion project.

In the afternoons, after finishing his day job at an information technology company, he either works remotely or takes the bus to the Red Cross office to help people in the vulnerable situations in the city.

Tonight, the Red Cross volunteers are cooking hot meals for migrant families who have come to Uruguay in search of a better life. As they pack up meals, Pablo explains that he misses the pre-pandemic days when he used to be able to serve the food and sit with the people while they ate, building connections and relationships.

“We used to get so close to the families,” he tells me as he places the lid on a dinner box. “They would stay in touch with us while they built a better life here in Uruguay. If they had a baby, they would send us the baby photos. Their child would even call me ‘uncle.’”

Pablo smiles. “Before the pandemic, it was like the staff of the Red Cross and the migrants we served were all one big family.”

Since COVID arrived in Uruguay, the Red Cross has recruited many additional volunteers to help cook, pack up and deliver food to migrant families, no matter where they might live, as well as to members of the local community also affected by the pandemic.

Before the organization used Zello, volunteers had cell phone connectivity but there was no real-time tracking as they delivered baskets of food, clothing and hygiene kits in their vehicles from the subsidiary to people who otherwise would not have them. The volunteers, however, were frequently nervous driving through unfamiliar parts of the city, down narrow and sometimes unpaved roads. “We would just say ‘good luck’ to the volunteers and hope they didn’t encounter any danger in delivering humanitarian help,” Pablo says.

But when the Montevideo Subsidiary of the Uruguayan Red Cross began to use Zello, it changed everything.

“We started using Zello as an experiment, but we soon realized we really needed it,” Pablo explains. “Zello helps our drivers and our team in the field stay safe. We can see if they get off course on the map and then immediately contact and redirect them. It’s amazing!”

In addition to increasing safety, Pablo says that using Zello improves the efficiency of the operation. The delivery coordinator watches the volunteers on the Zello Work map and when one is five minutes from arrival at a home, the coordinator will call the person and ask them to wait outside for their package. “This makes the whole delivery process faster,” says Pablo. “So we definitely need Zello. It’s really not an option.”

Pablo, a man with a huge heart for service, shows up at the Red Cross seven days a week. If he can’t go in person, he works remotely. In addition to providing food and clothing to migrants, Pablo says that the Red Cross offers emotional support and basic resources.

What’s so rewarding to Pablo is seeing how this combination of services can help so many new migrants create a better life for themselves and their children. Pablo remembers a mother, father and their 3-year-old son who showed up with no money and no food. “The boy was small, skinny, shy and scared,” he says. “They were absolutely desperate for help.”

In a short time, Pablo and the Red Cross staff helped the family get established. “They had papers. They had jobs. I get goosebumps when I see a family like that one being able to get out of that terrible situation,” he says.

Sometimes, something as simple as a hug is the most important thing Pablo has to offer. He remembers a young migrant woman who arrived from another South American country. Before offering her food or clothing, he simply gave her a hug.

“You have no idea how much I needed that,” she told him.

Addressing mental health concerns of vulnerable populations is also an important part of the Red Cross mission. In fact, every year on October 10th, the Montevideo Subsidiary of the Uruguayan Red Cross participates in World Mental Health Day, which promotes taking advantage of support resources without stigma for mental health problems. While anyone living in poverty is likely to experience outsized stressors relative to the general population, the pandemic has increased rates of depression in Uruguay.

As Pablo has witnessed again and again, immigrating to a new country is difficult in the best of circumstances. Unfortunately, not every migrant that seeks help from the Red Cross ends up achieving the dream of a better life in Uruguay. In fact, says Pablo, sometimes people give up too soon, only to return to the country from which they came.

There was one couple Pablo recalls who really got derailed. The Red Cross had helped the young husband and wife get on their feet; the husband got a job working at a food stand in a shopping mall and the wife had a baby. They were really making it on their own. Although Pablo didn’t see them for many months, he felt happy thinking they were doing well.

But then one day the young family reappeared. The husband seemed devastated. He told Pablo, “I’m really ashamed, but I lost my job. We need you to help us again.” Soon after, the family left Uruguay and returned to their home country.

“At that point, they just couldn’t take it anymore,” Pablo tells me. “They didn’t get the opportunities they were looking for. It wasn’t as easy as they’d hoped.”

Whenever a family leaves the Red Cross—whether it’s because they no longer need assistance, or because they’ve given up on seeking a way out of poverty in Uruguay—Pablo really hates having to say goodbye.

Now Pablo looks down for a second and gets quiet. Then he says, “That’s what I miss so much about the dinners we used to have before the pandemic. The people used to come here. We would sit together while they ate. We would build relationships. Now, because of COVID, we just pack the meals and deliver them. It’s the safe way to do it.”

But the Red Cross’ work always extends beyond the immigrant community to whoever is in need of care. At the beginning of March 2021, the government of Uruguay reached out to the Red Cross for help in welcoming patients and getting them checked in at Montevideo’s two largest COVID vaccination centers.

On March 13, 2020 Uruguay declared a public health emergency when the first four cases of COVID were found in the country. Ever since then, the subsidiaries of the Uruguayan Red Cross have worked together to assess the COVID-related needs of their communities, taking into account cultural and language differences. The organization then coordinates with the government and other NGOs to facilitate a response, which includes public health messaging around protective actions like washing hands with soap and staying home when possible.

Now, a year after the public health emergency was declared, Pablo and the staff at the Red Cross are encouraging people to get vaccinated. In Montevideo, the Red Cross staff not only welcomed and registered residents at the large vaccination centers, but they also helped with care both before and after the vaccine was injected during the fifteen to thirty minute observation period.

“These centers are very large and can get quite hot inside,” Pablo explains. “Recently, this woman came to get her vaccine. She was very nervous. After the injection, she was dizzy and shaking and almost fainted,” he says.

Of course, Pablo was the perfect person to help out with this type of situation.

“I just talked to the woman and distracted her for 45 minutes,” he says. “She calmed down and ended up telling me everything about her life. We always had medical personnel close by, but luckily, she just needed emotional support. By the time she left, she wasn’t shaking anymore. She was completely fine.”

One thing is clear: Pablo Capeluto is called to this work of the heart. His service to others is what drives him and gives his life meaning. It’s what causes people he’s only recently met—again and again—to quickly consider him a beloved member of their own family.

“I love what I do!” Pablo says. “My work with the Red Cross is person-to-person. It doesn’t matter what kind of education or training you have. This work is about connecting with people.”

When You Deploy Zello to Your Team, Should You Use WiFi or Cell Data?