What Ken Wooden loves about his job is that no two days are the same: he’s constantly required to troubleshoot and think on his feet.

Ken got started in the courier industry when his mother, a driver, needed a reliable backup for her route. That was 17 years ago.

“The driving part is the fun part,” says Ken. “I’ve been to almost all 50 states with personal or work travel. I’m missing Hawaii and Alaska.” 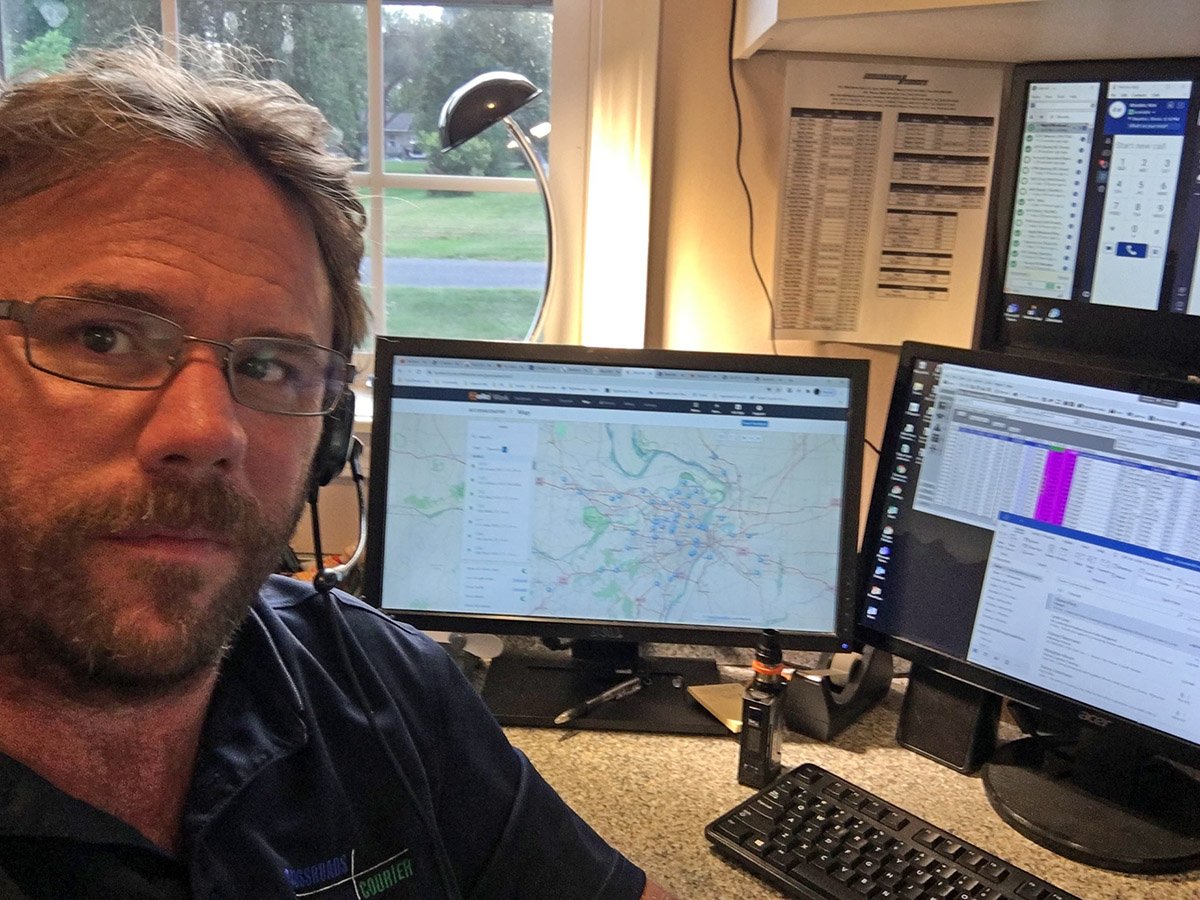 Ken’s current employer, Crossroads Courier, warehouses for several different companies — computer servers for Dell, cash registers for Walmart, and products for several supermarkets — and delivers boxes of blood to local hospitals. To organize logistics and deliveries, more than 400 drivers are divided into smaller groups of 12-15 based on their geographic region. Each small group has its own Zello channel and its own driver support person like Ken to manage the channel.

“We use Zello for communication with our drivers out in the field. We use the mapping tool to know where our drivers are at all times, and we use it to efficiently dispatch jobs to them. It’s very helpful,” he says.

Since he first drove backup for his mother, Ken has worked as a field trainer, an in-house trainer, and an in-house contract manager. These days, he spends most of his time on operations, dispatch and driver support. While his official title now is Operations Analyst, it’s probably more accurate to call him a Jack of All Trades. In this role, Ken assigns drivers to jobs, monitors their locations, and troubleshoots any problems.

“I’m second shift,” says Ken, “so [when I come on], I need to look at my drivers and see who is where, what’s going on. I do driver support as well so I see who needs what help. I need to look at the dispatch board and get Zello all set up. We have multiple dispatch zones and different channels.”

Ever since the pandemic hit, most of the management and office staff at Crossroads Courier started working more from home, so now they use Zello to communicate with each other, too.

In early September of 2020, Ken was sitting in the office that overlooks the warehouse. Through the window, he watched the forklift pull boxes of computer parts off the warehouse shelves, while he tried again to reach one of the route drivers. No luck.

Maybe she’s having trouble getting her phone to connect with the dispatch software, Ken thought.

But when he still couldn’t reach her, Ken checked the Zello map. It located her car in a tow yard—nowhere near where she should have been.

Has she been in a wreck?

Ken contacted the local police department, which confirmed that the driver had been in an accident. After contacting the driver’s family, Ken was able to check with her family to see how she was doing and send another courier to pick up the delivery items from the scene of the accident and complete the job.

“Zello has helped us numerous times with locating drivers, helping drivers out, and seeing where they’re at in real time,” he says. “It’s a lifesaver.”

The couriers at Crossroads have learned a thing or two about saving lives, given that transporting blood is a regular part of their delivery routes.

“The hospital might have someone who is on the table bleeding out,” Ken says. When these calls come in, Ken dispatches a courier to pick up a Styrofoam cooler from the blood bank and zip it over to the hospital.

“We have a lot of new drivers who have never been in these hospitals,” he says. “Any hospital you go to can be a maze. I’ve walked several drivers through where to go, how to get there, and what to look for using Zello.”

In the past 17 years, Ken Wooden has traveled many roads in the courier industry, building up a unique and valuable skill set along the way.

Helping a new driver navigate an urgent delivery to a hospital could be highly stressful for many people working in driver support. But because of his experience, Ken takes it all in stride. “I’m really good at troubleshooting,” he says.

In fact, it’s the problem-solving part of the job that Ken likes best of all.

“Each day is different,” he says. “You just meet each day the best you can.”

The Zello Free App is NOT Going Away