Thirty two years ago, John Hain wanted to be a welder, so he enrolled in college to study metallurgy. John completed college and began a career in welding and metallurgy in the late 1980s.  Before long, though, John realized welding wasn’t the right profession for him.

When he asked himself what he might like to do better, John thought about his neighbor in Harrison County, Texas, where John grew up.

The neighbor, who was a police officer, sometimes took John out in his police car at night, which was incredibly exciting. John figured he would quit his job as a welder and put himself through the police academy instead. 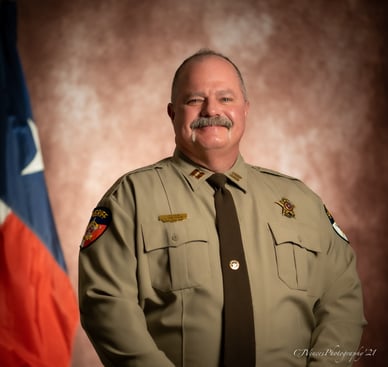 As it turns out, law enforcement was a much better fit for John than welding.

After graduating from the police academy, John volunteered as a sheriff’s deputy. He was responsible for picking up prisoners on warrants. But within a year, the Harrison County Sheriff’s Office hired him full-time to work as a jailer. 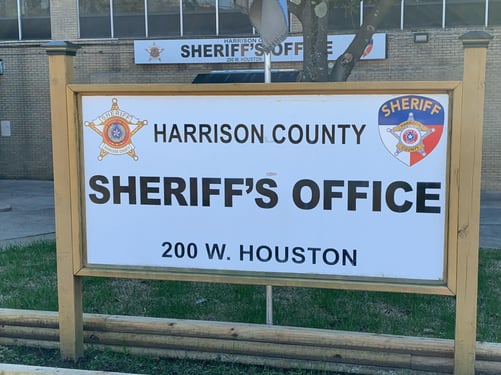 Sitting on the border of Louisiana in East Texas, Harrison County covers 900 square miles. With a population of about 69,000, the county has several towns, including Marshall, Elysian Fields, Karnack, Hallsville and Waskom.

At the time John joined the Sheriff's Office, the county only had one jail with 52 beds and 8 inmates incarcerated, in late 1989.  The jail was located on the fourth floor of the courthouse. However, in 1992 when crack cocaine hit Harrison County, the county made plans for a jail expansion because of overcrowding.  The jail expansion was approved and completed in 1994 to 150 beds.

Then the opioid crisis hit and the need for more beds increased. In 2011 the county opened an annex jail on Travis Street with 200 more beds.

During the past three decades, John has climbed the ranks in Harrison County, working as a sergeant, which involved managing 5-7 jailers, and then as a lieutenant, overseeing day-to-day operations at the jail.

Today John is not only a captain, but he’s also a jail administrator and IT support technician for the sheriff’s office. He manages a staff of 51 people in a department that has a total of 135 employees.

John says one of the most rewarding parts of his career has been helping rehabilitate inmates who come in with no prospects for the future, and upon serving out their sentence, leave with a promising life plan.

“Jeffrey is this local boy we helped get his Commercial Driver’s License. He was a low-risk inmate, so he was eligible for the work program,” he says.

Inmates like Jeffrey enroll in the work program; they attend school by day but then return to sleep at the jail at night.

“I’m really proud of Jeffrey,” John says. “He’s just one of those who got mixed up in the wrong things, couldn’t get away from drugs. He went to school through our work program and today he works at a really successful trucking business.”

When John first started as a jailer, he used a typewriter to enter data about each prisoner on a booking card: who came into the jail, why were they arrested, and any medical needs. The county later purchased an IBM Systems 36 Mainframe. One of his jobs after the purchase was to enter the old typed booking cards into the new IBM System.

“I was a really fast typist because I took typing in high school,” John says. “The lieutenant noticed how fast I could type up the cards and get them entered into the new IBM System, so he sent me to school to learn more about the whole IBM System.”

This education sparked John’s passion for all things IT.

“I loved everything about computers,” he says. “They were so much better than typewriters. I thought, ‘Man, this is the way to go!’”

Before long, John was working with inmates during the day, and then backing up the sheriff’s data on the IBM mainframe at night.

A few years later, when the sheriff’s office switched from mainframes to PCs, John furthered his education and earned CompTIA Certification through the Computing Technology Industry Association and led the transition for the department. 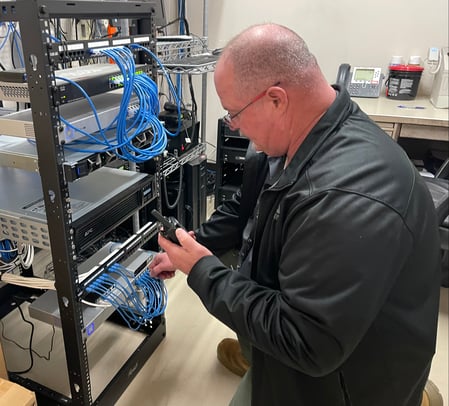 Bringing Technology to Inmates and Their Families

Today, as captain of the Sheriff’s Office, John uses his IT skills to improve operations at the courthouse and the jails.

“On a normal day, I help people all over the courthouse and the jails with Odyssey, our jail management system,” John explains. “The whole courthouse has it, so when we book a prisoner in with Odyssey, we can see everything. The prosecutors and the courts all have their part to do.”

One of the things John is most proud of is that he’s brought cutting-edge technology to the county jails.

John set up an ATM in the jail lobby of the jail, so that families can load money into the ATM and fund an inmate’s account.

Also, all inmates in Harrison County are issued tablets that enable them to converse on video call with pre-approved friends and family whenever they choose, as long as their privileges haven’t been revoked.

And John says unlike other jails that had to scramble to put technology in place when COVID hit, he barely had to make any changes. “We already had video visitations set up on tablets and PC’s,” he says.

Because of this, the inmates at Harrison County Sheriff’s Office could easily transition to making courthouse appearances or meeting with mental health professionals via computer.

One of the most exciting technological innovations John has been part of is the introduction and expansion of push-to-talk radio across the entire county.

“Up until a few years ago, we used VHF radio. But the sound was always muffled, and if I got in a dead zone, it wouldn’t work. You always had to be near a tower with a repeater that could boost the signal,” John says.

He explains that communicating with other law enforcement in the county became even more frustrating when the town of Marshall went to a digital radio system.

“Our deputies could be right down the street from one of their police officers and working the same scene, but since we were on analog radio, we couldn’t communicate with them,” he says.

The situation was untenable. Emergency responders and law enforcement from all departments across the county needed a way to quickly and clearly communicate with each other.

So John worked with Robert Nance of Right Click Plus, an IT services and support company, to introduce Zello’s push-to-talk digital app to all of the towns in Harrison County.

John and Robert built a series of gateways to enable the legacy radio systems operating across the county to interface with Zello. Then, using cross-linking, various towns and departments shared their Zello channels with each other.

Within short order, all of the emergency and law enforcement teams working across Harrison County had a way to quickly and easily communicate.

Today, there are 13 channels in the county, including one for the police department in each of three main towns, plus one for each fire department. There is a primary Harrison County Sheriff’s Office channel, a channel for each jail, one for IT, and a BOLO (Be on the Lookout) channel.

Zello offers not only high definition voice communications, but also the ability to text, so the BOLO channel is used to quickly disseminate a suspect’s photo to police across the county.

“I use Zello every day,” John says. “A lot of my job takes me between the jails, so I have my jail channels on here. And I can talk to my sergeants from anywhere I’m at. With Zello, I can be anywhere in the world and as long as I have a cell signal, I’ve got a radio. I don’t need a repeater. That’s a game changer."

But for the police in Harrison County, the transition to Zello has helped them in another way as well: sometimes the Emergency Response Team is working a search warrant. The members of the team need to communicate with each other, but if they’re on a traditional two-way radio, anyone with a scanner can tune into their conversation.

“There might be a high-risk warrant with weapons at the house,” John says. “These guys in the neighborhood will try to listen in on the police discussion with a scanner. But when we’re using Zello to communicate, there’s no way for them to hear our conversation, so they don’t know we’re coming. It’s a huge advantage.”

Even though John has risen through the ranks to captain, he still enjoys interacting with the inmates and helping them solve problems, so he’s glad that his office is still inside the main jail.

“You can’t just put people in a cell and say here are the rules,” John says. “You need to talk to people. They’re not just a number and stuffed in a cell. We try to deal with people one on one.”

From Shore to Shelf: What Retailers Really Need in Today’s Rocky Landscape