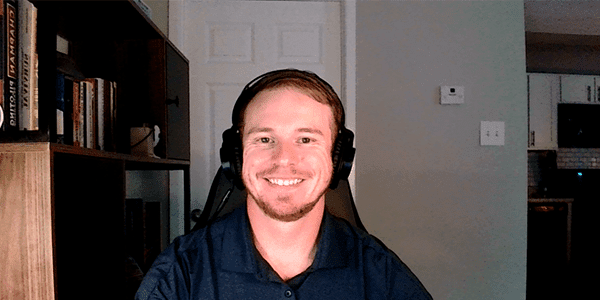 Jacob Harris was living in a tiny house with his wife on Alabama’s Gulf Coast. It was September 16, 2020 and a rapidly intensifying Hurricane Sally was about to make landfall. Jacob and his wife evacuated to the city of Mobile just before Sally hit the coast and the winds picked up, gusting at 105 miles per hour.

The next morning at dawn, Jacob returned to his home to find a tree had fallen on it. After he removed the downed limbs, Jacob’s Boy Scout training kicked in: help others whenever you can. So he began roaming the neighborhood, clearing debris from neighbors’ homes and yards.

Later in the day, Jacob checked his social media. There was a Facebook post that caught his attention. It was from a guy named Mike White, who Jacob didn’t know. Mike ran an organization called CommsConnectUS that Jacob had never heard of.  He was looking for a volunteer to help a woman in Daphne, Alabama. The woman was trapped in her house because of fallen trees.

Jacob, who lived within driving distance from the woman, didn’t think twice. He loaded up his car with groceries and ice and took over the supplies. He was able to remove the tree that blocked her door and provided the woman, who seemed like she was in shock, with food and water.

After making the delivery, Jacob called Mike to let him know the woman was going to be okay. That’s when Mike told Jacob all about CommsConnectUS.

CommsConnectUS (CCUS) was founded by Mike White after a 35-year career in urban fire/EMS/law enforcement and emergency management.

Mike started CCUS to support boots-on-the-ground emergency responders with these tasks so that they could better focus on providing direct help to people in dire straits. It is the mission of CCUS to provide a platform to connect Ham radio users and non-Ham radio users, as well as social media users under a single umbrella to support frontline volunteers.

CCUS has a vast network of thousands of volunteers around the country who support frontline volunteers by gathering on-the-ground information about hurricanes, floods and blizzards; monitoring political events; and fielding emergency requests.

When Jacob learned about CCUS, he instantly wanted in. After all, he had been a Boy Scout from the ages of six to eighteen. And he had also drawn inspiration from Mr. Rogers, the late television personality, who famously said:

“When I was a boy and I would see scary things in the news, my mother would say to me, 'Look for the helpers. You will always find people who are helping.'”

Jacob, who was 27 years old at the time, decided to become one of the helpers.

That was a year ago. Since then, Jacob has volunteered as the Zello Coordinator for CCUS. In this role, he ensures that hundreds of the organization’s volunteers across the country know how to talk on Zello.

Like many rescue organizations, CCUS uses a combination of Ham radio, Zello, and social media to communicate during a disaster.

Zello’s radio-style communication is great for rescue efforts because it works over even marginal connection. It also allows organizations to create an unlimited number of channels in which  to coordinate response in specific localities and more widely, with the ability to easily add new members — crucial when many different organizations are responding from across the region or country. And it’s great at instantly pinpointing locations.

Ham radio is also critical to disaster response, as it works even when cell towers are completely down. However, it has limited range and requires special training, licenses, and equipment. Together, Zello and Ham radio make a powerful network that’s accessible, resilient, and, crucial to CCUS' efforts, allowing volunteers to participate whether they’re in the heart of the disaster or a state away.

To this end, Jacob holds ZelloNet, a training and update meeting for the organization, held twice a month. The CCUS Zello channel crackles to life as users nationwide sign on to practice using the app, keep up-to-date on organizational news, and learn about emergency preparedness and response.

Usually, Jacob kicks off ZelloNet meetings with a general call to attention, announcements, attendance check-ins and then a fun activity like a trivia game that incorporates training for how to use Zello. The training usually covers how to use a particular Zello feature, like sharing location, or on a particular aspect of emergency response, such as how to know when it’s time to evacuate prior to an extreme weather event.

Recently, when Hurricane Ida hit Louisiana and Missisissipi, the volunteers with CCUS flew into action to provide assistance to the Louisiana Cajun Navy.

Jacob posted a message on Twitter saying, “If you need help, contact me.” But he wasn’t prepared for what happened next.

Within minutes, Jacob and CCUS were inundated with requests. In fact, Jacob received thousands of notifications every single hour from people desperate for help for themselves or for someone they love.

“I’m an Eagle Scout,” Jacob says. “I’ve done a lot of volunteering before, but I wasn’t mentally equipped for some of the calls I got. Some of them were pretty heartbreaking.”

At the time the storm hit and for many hours after, the winds and rain were so strong that emergency responders couldn’t safely go out. So it fell to Jacob to let people know they would need to wait for assistance.

In the meantime, he sorted through the incoming messages and passed them onto Mike, the CCUS founder and director, who was working dispatch for the Louisiana Cajun Navy. Mike entered the incoming contacts onto a spreadsheet in preparation for when the storm subsided and rescues could commence.

As Jacob fielded requests, he tried his best to get all the necessary information from each person reaching out: What’s your name? Do you require medical care? Are there others with you? And, crucially, what’s your exact location?

Jacob worked through the incoming messages as quickly as possible, responding to most with a heart to acknowledge he’d received them. But in some cases, if a person sounded especially terrified, Jacob would invite them to connect more personally on Zello.

“This woman was in LaPlace, Louisiana. She was standing on her second floor kitchen counter holding two babies while we spoke,” Jacob says. “She kept saying, ‘Help us! Help us!’ but I had to let her know that the responders couldn’t go out yet.

“She had no way to get to her roof or attic, and the wind was still blowing at 80 miles an hour. A tree crashed onto the house while we talked. I could hear the unbridled fear in her voice, so I just tried to give her some grace, some strength, some hope,” he says.

“This terrified woman was able to give me her address and tell me how her house was laid out and where to find her in it, so I passed this information to Mike, who was building the list of who needed help where.”

It took eight hours before the winds died down and the curfews in various parishes lifted. That’s when Mike dispatched the Louisiana Cajun Navy teams to help.

While Mike could reach the Louisiana Cajun Navy leadership via Zello, the cell towers had come down in many neighborhoods; this meant responders on the ground couldn’t always reply back to dispatch. But at the end of the day, when the Louisiana Cajun Navy volunteers returned home, Mike updated the spreadsheet with the status of every person they had attempted to help that day.

On the spreadsheet, there were columns for “Name,” “Address,” “Mission Status” and “Successful?”

The day after Jacob fielded the call from the woman with the babies, he anxiously checked the “Successful?” column. To his relief, someone had entered “Yes.” The woman and her babies had been saved from this real-life nightmare.

“During Ida, from Sunday morning to Thursday night, I got about fourteen hours of sleep,” Jacob says. “I drank a lot of Mountain Dew because I don’t drink coffee.”

The messages that came in via Twitter, Facebook and Zello included several cancer patients in the middle of chemotherapy who needed treatment; a nursing home full of senior citizens who required medical care and water; and a pregnant woman in active labor.

“We were able to help most of these people,” Jacob says. “But more than 60 individuals were killed as a result of Hurricane Ida. Of course, the deaths are tragic, yet compared to how bad the storm was, it’s a blessing there weren’t more fatalities.”

Using Zello to Be a Good Neighbor

At the end of the day, Jacob says, it’s simply about people helping people — about being a good neighbor.

“Zello is an important tool that helps our remote volunteers help their neighbors,” Jacob says. “If we all treated each other like the neighbors we’d like to have, a lot of our problems would go away.”

The Boy Scouts and Mr. Rogers would surely agree with that.