Daisy Curto loves getting to know each and every one of the 37 residents who lives at the Columbia Cottage Assisted Living Center. And most of all, she likes to help them feel like they live in a warm and nurturing home.

As the Residential Wellness Director and a certified nurse, it’s Daisy’s job to help residents make doctors’ appointments and ensure they get the right medications. She also coordinates daily with staff and family members to ensure all residents receive the healthcare they need.

In her previous healthcare jobs, it was always rush, rush, rush. There were constant emergencies, too many patients, and obstacles to efficient communication.

“At the rehab place where I worked before this, there would be 40 patients to one nurse. None of us had time to help each other out because we all had the same caseload,” Daisy says. “But here at Columbia Cottage it’s different. We all take care of every resident and everyone on staff helps each other.”

Daisy says that the more relaxed pace at Columbia Cottage allows her to really get to know the people who live here. “I love to hear their stories,” she says. “I find out so much about them. What I love most is to sit with them and learn about them.”

There are four single-level Columbia Cottage assisted living facilities in Pennsylvania. Daisy works at the location in Collegeville. Here, as at the other three facilities, residents live in apartments that grant them the flexibility to age in place; there are ten levels of care offered, and each resident gets an emergency alert system and 24-hour nurse supervision. Staff at each facility are dedicated to honoring each resident’s dignity, independence, privacy and right to exceptional care.

A family member of one resident said, “Columbia Cottage does not feel like an institution. Rather, it feels like a home.”

And that’s what Daisy and the rest of the staff aim to create: a homey feeling.

“Our residents know they once had a place they lived with their significant other and maybe their children. Now they know that they aren’t able to live on their own and that eventually they’ll need people to help them with things,” Daisy says. “Columbia Cottage is now their home. If they want to go in the kitchen and get something to eat, they can do that. If they want to go out and plant something in the garden, they are welcome to.”

So most mornings, Daisy leaves her husband and three sons—8-year-old twins and a 6-year-old—sleeping at her home and heads out to arrive at work by 6am.

Her first task is to read the report from the nurse on the night shift, so she can understand the status of each resident: Who has a headache? Whose foot feels better? Who switched their meds?

Next, Daisy talks to the coordinators to see how many people will be on staff that day. There are two med carts, but sometimes there’s only one med tech on the day shift. On those mornings, Daisy manages the second medical cart, this means that she gets to visit the residents in their apartments as she hands out their medications. Currently, the residents range in age from 80-99 years old. “The 99 year old is a real spit-fire!” Daisy says with a laugh.

After the morning medications are distributed, Daisy will usually go into her office and spend the day coordinating with doctors, nurses, and residents’ families. Throughout the day she’ll visit with residents. 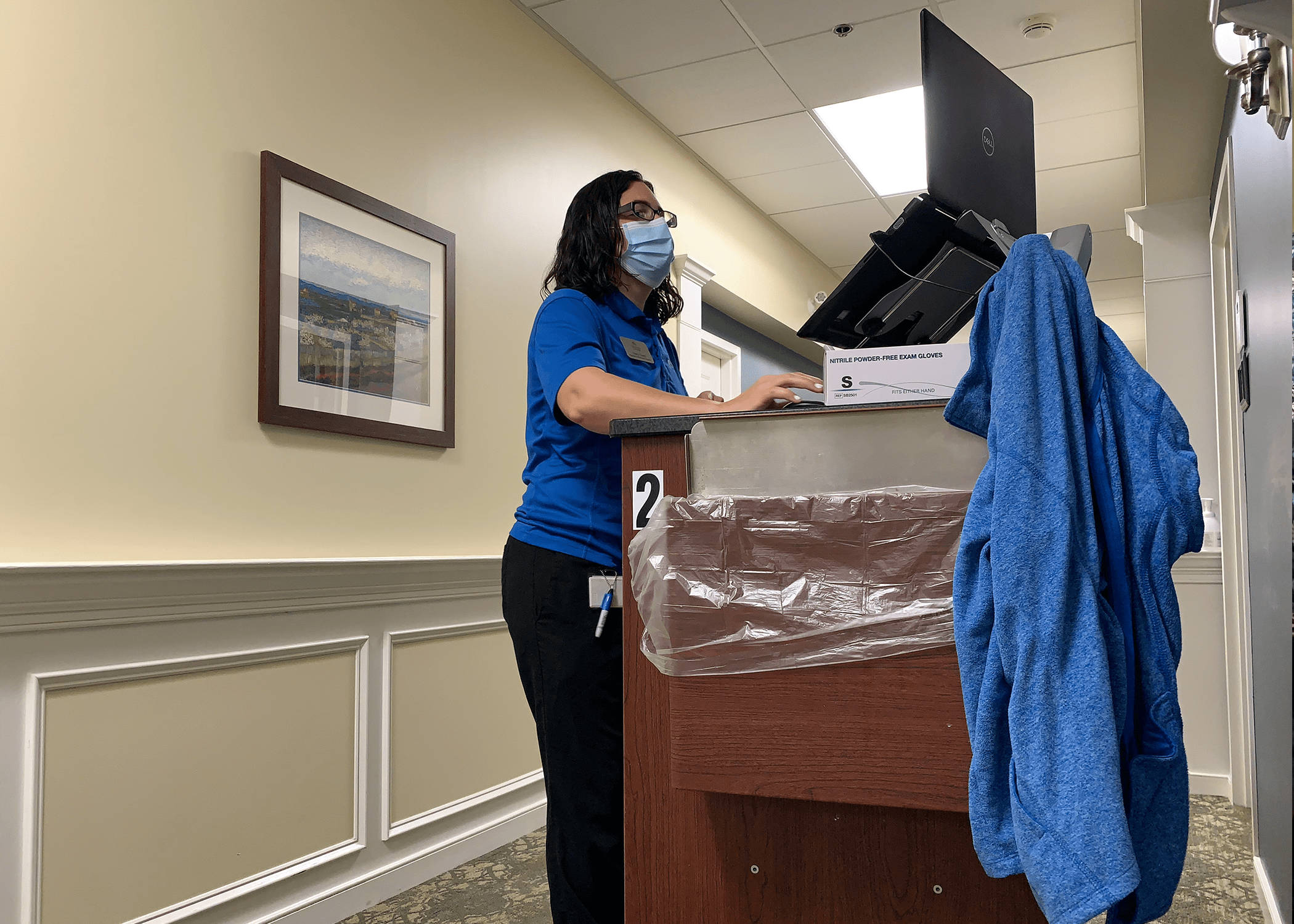 It’s Daisy’s favorite thing to do—stopping by a resident’s apartment to hand out medications, or simply to check in. Daisy says it’s common for residents to talk to her about their families and the homes where they lived before.

Recently, Daisy was visiting with a woman when she noticed a framed picture of a beautiful, stately home hanging in the kitchen. When Daisy complimented the house in the photo, the woman told Daisy about it. She said that when she and her husband bought the home, it was a dump that stood on a 76-acre farm. The woman and her family spent years fixing up the property. Now that the woman’s husband has passed away, the extended family continues to use it as a vacation home.

“Knowing that gives me so much joy,” the woman told Daisy.

“Another resident has a picture frame with a doorknob inside it,” Daisy says. “The doorknob is from the first home she owned with her husband. It’s so sweet.”

Yet another resident told Daisy that she finally decided to sell her home after moving to Columbia Cottage.

“We sold the house to a couple with a young child,” The woman smiled as she spoke to Daisy “It reminds me of when we moved in with our child.”

Listening to the residents helps Daisy feel more connected to their physical and emotional needs. It also enables the residents to experience Columbia Cottage as a nurturing home full of people who truly care about them.

Today Daisy is 38 years old. Before this point in her career, she rarely had time to sit with patients and hear their stories. At age 20, after Daisy became a Certified Nursing Assistant (CNA), she got a job in the emergency department at a hospital in Philadelphia, where she worked for many years. Eventually, she got her EMT license.

Then one day, during her sixth year at the emergency department, a shocking event made Daisy realize she really wanted to become a full-fledged nurse.

A mother ran in carrying a limp 5-year-old boy in her arms. The boy had had an asthma attack and by the time they got to the hospital, he wasn’t breathing.

“The mom hadn’t called 9-1-1 so we weren’t prepared for him,” Daisy says. “I can’t even describe the fear that came over me when I saw the child. I picked him up and ran him to a bed. I was crying while I did CPR on him. After CPR, we put the boy on a ventilator and he actually made it.

“The mom brought him in a few weeks later to thank me, and he was the cutest little thing. I was crying and the mom was crying. I gave the boy a big hug. It was the most rewarding experience I had ever had and it really lit a spark in me.

"From that day on, I knew that eventually, I’d like to become a nurse because when you’re a nurse, you don’t just know what to do but you also really understand what’s happening in the body and why. I wanted that knowledge.”

It took a decade for Daisy to realize this dream. In the meantime, she spent years working at a wound care center. And once Daisy finally got her nursing license, she moved to a facility for people with brain injuries and later to a short-term rehab facility.

But when COVID struck, the rehab center became too overwhelming, and Daisy decided to find a position that would let her grow into management. Luckily, there was an opening at Columbia Cottage.

When Daisy arrived at the assisted living facility in March 2021, all of the residents were already vaccinated for COVID. By the spring of 2021, most family members were also vaccinated. This meant they were abie to visit their loved ones inside the apartments.

“I’m so mad at COVID!” Daisy says. “It makes me worry. If I hear a sneeze I think ‘Oh no! That better not be COVID. But of course, now that our residents are vaccinated, it’s likely just a cold.’”

It’s Daisy’s deep level of concern for the residents that makes her excellent at the job. And it’s the Zello app that helps her do her work so much more efficiently.

Columbia Cottage in Collegeville has 41 residential units and it’s laid out in a U-shape.

“If I yelled to someone on the other side of the facility, they would never hear me,” Daisy says. “Plus a lot of time, we work with our residents inside their apartments. This is why we use Zello to communicate with each other.”

However, because of HIPPA, staff never uses patient names when communicating via Zello; instead they refer to residents by their room numbers.

“I’ll page someone over Zello and say ‘I have a family on the phone for the resident in Room 6,’ or I might say, ‘Could you come to the nursing office to talk about the resident in Room 31?’ Using Zello helps me stay on top of what’s happening everywhere throughout the day,” Daisy says.

In fact, a few weeks ago, a resident complained about pain and saw a doctor. But the next day the CNA on staff put a call to Daisy over Zello. “Something’s happening with the resident in Room 20,” the CNA said.

Daisy beelined it over there and realized the woman needed to get to the hospital. But the patient was reluctant to go.

“It’s up to you,” Daisy told her. “It’s your choice, but I think it would be the smart thing to do. If there’s nothing wrong, you can be mad at me when you come back.”

The resident took Daisy’s advice, and after a battery of tests at the hospital, she discovered she was suffering from a serious gallbladder problem that needed immediate attention.

“Without Zello, the CNA would have had to go all over the facility looking for me, and I was on the whole other side of the property at the time. Thanks to Zello, I was able to immediately attend to the resident in need,” Daisy explains.

After the woman returned to Columbia Cottage, she thanked Daisy for making her go to the hospital. “That made me feel so good,” Daisy says.

For its senior centers like the Columbia Cottage facilities, the Horst Management Service provides development support, construction services and management, facility maintenance, as well as recruiting, hiring and training. The Horst Group has helped develop retirement communities for more than twenty years.

Of course, the Horst Management Service couldn’t achieve its goals without frontline workers like Daisy Curto, who take time each day to help the residents feel like Columbia Cottage is not just a place they must live because they’re old, but a warm and caring home.

“I get to know the residents inside and out,” Daisy says. “I know what medications each one takes, but I also get to discover what their favorite milkshakes are. And that’s why I love working here.”