What is the best group voice chat app for personal and business needs?

There are many ways to communicate digitally these days. Text chat apps like Facebook Messenger, WhatsApp, and SnapChat are great for sending a quick message, details about meeting up, or of course, that must-see meme. More desktop-centric apps like Slack connect colleagues quickly for centralized work discussions. With video conferencing apps such as Zoom, Skype, Google Hangouts, and GoToMeeting, a click of a link launches a 10AM standup meeting, or a brainstorming session with a buddy about vacation plans, whether employees are working in the next room or from separate desks around the globe. 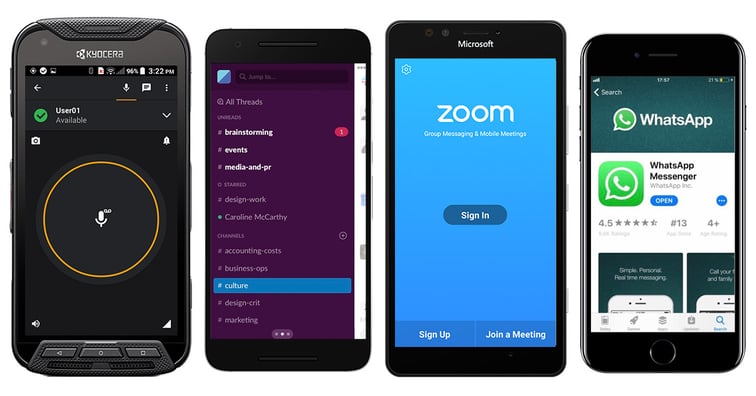 There’s a lot to be said for both of these kinds of messaging apps — but there’s something missing from them as well. Text chat apps are cumbersome when your message is more complex and thoughtful, a fact you’ll know well if you’ve ever typed out what feels like a novel on your phone and then felt pain radiating from your thumb through your neck. Even on a desktop, text loses the nuance of in-person conversation, dropping tone of voice and any cues you might garner from facial expressions. Video chat helps solve that latter problem, but conferencing can be overly formal, losing the richness of those casual and often inadvertently creative conversations that spark seemingly out of nowhere by the water cooler. What’s more, when there’s a group on the call, it can be difficult to get a word in edgewise.

Thankfully, there’s another option for connecting that falls in between these two categories: group voice chat apps. Rather than focusing on text or visuals, group calling apps rely on the power of the human voice. Push-to-talk apps in particular are like a walkie talkie on your phone: all you have to do is tap a button, and you can broadcast to anyone you’ve specified. This makes for much more functional and efficient communication than either video or text messaging apps, or even phone calls.

What are voice apps for business?

Voice apps for business are smartphone apps that allow team members to connect via voice without having to schedule a conference call, look up a phone number, or either write out, read, or respond to a long text or email. The interface for group calling apps is intuitive, generally as simple as a one-push button. That’s probably why the businesses that rely heavily on group calling apps are those that are most tightly focused on efficiency in communication, including the construction, first responder, retail, transportation, delivery, and hospitality industries (though even more office-centric businesses can realize benefits). 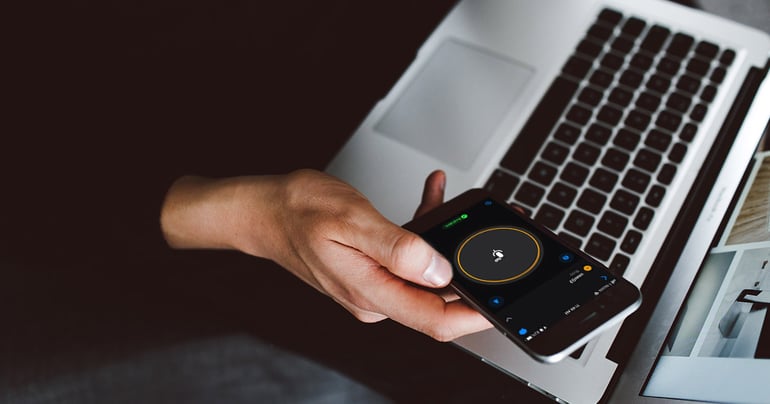 These businesses traditionally relied on radios and walkie talkies to connect workers that are mobile or out in the field with a dispatch center, other workers, or a command center. This didn’t change much as cell phones initially proliferated, because the process of making a phone call was too cumbersome in comparison to simply pushing a button and talking into a speaker.

That’s changed, however, since group voice chat apps have come onto the scene, bringing all of the functionality of a walkie talkie onto the relatively inexpensive (from a business’ standpoint) cell phones that employees are already walking around with in their pockets.

Businesses that can use this functionality

Any business that is on the front lines, communicating with customers or patients, can make good use of a group voice call app.

For instance, a retail business might use a group voice chat app to let an employee on the seventh floor know a customer on the first floor needs a specific shoe from a stockroom. These apps also enable team members to communicate across stores, whether those locations are in the same city or halfway across the world, as there are no bandwidth limits like there would be with radio.

A construction worker might use a group voice chat app to let their foreman know they need more siding delivered before they can continue on with the job, or to communicate with other team members about upcoming tasks and changing situations. Foremen use group chat apps not only to communicate with their team, but also to communicate with the field office as priorities shift rapidly throughout the day based on available supplies and team members, as well as on a host of other unexpected issues and delays that arise on-site. 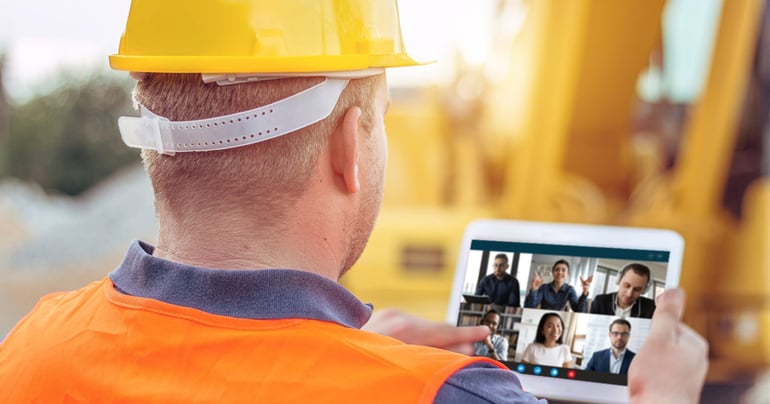 Hospital staff use group voice chat apps to do everything from coordinating the movement of equipment from one wing to another to flagging down personnel urgently needed in a patient’s room when an intercom call hasn’t reached them. In fact, because group voice chat apps operate on the phones health workers already have on them, hospital administrators are quickly turning to them to replace old and expensive pager systems.

Even search and rescue teams use group voice chat apps to relay urgent messages in emergent situations to one another across areas of low radio bandwidth.

From TV to real life, you’ve probably seen first responders like ambulance drivers and police officers communicating via radio. What you may not know is how complex those radio systems can be. Moving through a big city, a single first responder may have to cross several radio dispatch networks, while tuning out the noise of multiple open channels filled with talk from other first responders responding to calls. In addition to being cumbersome and costly, those networks typically only connect first responders with dispatch, not with any of the higher ups or other office members with whom they might need to communicate.

In rural areas there are fewer radio towers, so radio often lacks the bandwidth to offer significant coverage across the often vast areas that rural first responders are responsible for.

That’s where group chat apps come in. In cities, first responders use group voice chat apps like Zello to centralize their communication onto a singular platform so there’s less hopping between networks. Private channels concentrate the conversation so that only relevant members receive voice communication, again, eliminating the noise of open radio channels. Channels can also be created for communicating more specifically with members of the team who aren’t on the frontlines.

In rural areas, Zello can function as a radio gateway. This means that a single computer with a radio gateway running Zello acts like a bridge between the existing radio network and Zello. Because a gateway-equipped computer can be connected to both Zello over the Internet and to the LMR frequencies traditional radios use, first responders use the Zello app on their cell phones as an extension of their radios, with much more extensive range than if they relied solely on radio towers. That’s why cell phone-based group voice chat apps have become a go-to solution for many rural first responder organizations.

How does this differ from cell phones?

Group voice chat apps run on cell phones, but using them is much different than making a simple call. Rather than looking up a number, dialing and waiting for a phone to ring, you simply open the app, and push a button to talk. It’s much more like a walkie talkie in terms of functionality and convenience. However, it’s more private than a walkie talkie or other radio technology, because you can create private channels and communicate with specific team members who are centered around certain job functions, rather than broadcasting to everyone on the line.

What are voice apps for personal use?

As with business video conferencing, personal video hangouts can still feel formal. You often have to schedule them (ask any millennial: placing a Facetime call without texting to check availability first is a big faux pas). Texting over messenger apps still has many of the pitfalls for personal use as they do for business: texting is simply better for little snippets of conversation. And just like in a business setting, email is often too formal, overly analytical, overwhelming, and easy to lose track of — not at all what you’re looking for when you need to communicate quickly and casually.

Group voice chat apps are a great alternative for connecting family and friends.

What uses are there?

Just tinkering around the house? Make a new channel, call it Family Reunion, then add your most dear family members. Then push-to-talk. Voila! Like that, you’ll be reminiscing about old times.

Trying to pick your recalcitrant teen up from the mall? Alert them that you’ve arrived, then talk to them directly without having to text out your message, or waiting impatiently after seeing the read receipt for those three little dots to turn magically into a helpful message. Group voice chat apps are similarly helpful when coordinating with a partner on the school and extracurricular activity runs. You’ll feel like a parent extraordinaire as you walkie-talkie-cell phone your way to the most efficient afterschool run the world has ever seen.

Want to catch up with old college buddies who are spread across the country? Start a channel for your group, then chat the night away. Unlike video conferencing, which requires that you sit at your phone or computer, voice chat is great for multi-tasking, so feel free to get those laundry, dishes, and light house repair tasks done while you catch up. Seriously! Voice chat apps mean you can keep communicating while going about your day.

Group calling apps are also highly effective at coordinating family safety efforts. If your children have cell phones, you can create channels where they can easily get in touch with you or your emergency contacts in times of need. When you’re worried about where a loved one is, reach out with the push of a button. Likewise, when family members urgently need to get in touch with you, it’s simple to do so, even for those that are less than tech savvy.

Unlike radio solutions, group voice chat apps don’t require any expensive equipment, radio towers, rental fees, or maintenance and upkeep. They work on the cell phones you and everyone you know and love already have on you. Zello offers a free version, with the option to upgrade to its premium offerings, so you can experiment at no cost and witness for yourself the power of the human voice.

Ready to get going? Check out 10 more reasons to move your communications to Zello, then sign up for your free trial today:

Video Chat is Great, But What if You Need More?