Names and locations have been changed to protect night watch volunteers.

We opened up an email from a user in Malaysia named Jebat. Like many emails, it told about his experience with Zello and how much he loves the app. Unlike most emails, it revealed that for Jebat and his community in southern Selangor, Zello means life or death. He wrote:

Bro, thanks for this apps. We used to use PTT on GSM phones to serve our local community for night watch program. We did this for free and served the whole district 24/7. Suddenly, the only telco that served this app, stopped the service.

Crime rates rised up almost triple times. But thanks to you guys, we find this Zello and continue this public service to our community

Contact me through Zello channel. Like you all, I believe that verbal is better than written. Thanks again and may God bless you all for this amazing apps.

We connected with the night watchman. When Jebat responded, he told us that it was a bad time: 2:30a.m. in Malaysia and minutes after he and his contacts had spotted a criminal suspect outside.

Agreeing to talk later, we stayed on for a few minutes more, listening to the night watch contacts talk back and forth on their public Zello channel. It was fascinating – like listening to a police scanner – but because none of us spoke Malay, we had little to no idea what was happening and eventually logged off. 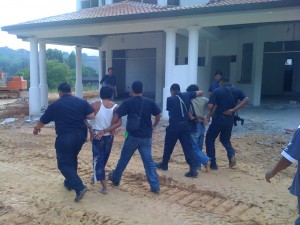 Then we received a second email, which explained exactly what we had been listening to. Jebat told us that from the time we had Zello-ed him the night before until about six hours later, he and his channel contacts had been tracking suspects outside a neighborhood in Sepang. Working with the Royal Malaysian Police, they arrested two criminals at about 9am MST. Jebat included the picture above, commenting, “This is the photo. Most of us are happy another crime’s busted. Who knows what would be waiting for us tonight...”

In the rest of his email, Jebat described the operation of two channels that help Sepang community, which reach about 680 users collectively. First, he explained the night watch channel:

We have members from various backgrounds, from religious teachers and professors to fire fighters, hamburger stalls to aircraft technicians, bus drivers to engineers and doctors, and of course, policemen.

Channel community is a PTT community that use a Zello apps on Androids, iPhones or anything that can work with it in order to keep close cooperation with Royal Malaysian Police (PDRM) and any other enforcements departments.

Our community serves throughout the nation, as there's request from outside Sepang's District to join us. But our main focus is Sepang. The more, the merrier, right?

Jebat contrasted the neighborhood security channel with a second channel that “react more to welfare and social channel, more to friendship.” Both channels, he recounted, “served this community for years.” Before they discovered Zello Sepang used a local telco on GSM phones with PTT. But in October 2011, the company abruptly stopped serving Sepang. Jebat described the incident in his email:

No reason. Just like that. Stop. Impact of this incident, we lost contact with each others in this matters as the members of both channels is around 680 members. Thank God, Zello is around. We have tried all popular push-to-talk apps, but Zello suits us. It works just like a pure walkie talkie function. Community always support Zello as our main communication apps... and thank you, because it's free apps...May God bless you.

How to Use Zello with Hearing Aids